I first got to know today's author on Twitter (his handle was @LizardVanilla, but he appears to have dropped out of the Twittersphere) and we cemented that relationship when he wrote for last year's Advent Blog series - FYI he wrote the most popular post of 2014/15. His name is Sandy Wilkie. He works as the Staff Engagement Lead at Bolton NHS Foundation Trust, as well as being a highly creative writer and events organiser. Given the importance of the sun in many ancient sites, I am delighted that Sandy's post is appearing today, the day on the cusp of the Winter Equinox (and shortest day of the year). This was often a day when shadows and sunlight held a deep meaning amongst the stones of our Celtic forefathers. Usually the Solstice falls on the 21st December, but it can occur on any day between 20th and 23rd December. This year the Solstice will be celebrated at dawn on the 22nd (i.e. tomorrow), so you have time to witness sunlight on/between stone, if you are near an ancient stone circle. The word "Solstice" comes from the Latin "solstitium" meaning the sun standing still.


On the 9th August this year, I stood in a truly magical place: Temple Wood stone circle in Kilmartin Glen, Argyll. Actually it's two circles, South East and North West, in a small clearing with birch trees around the edges. The whole Kilmartin area is filled with evidence of Neolithic and early Bronze Age occupation. 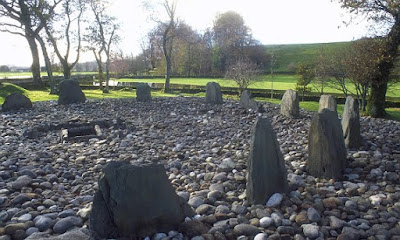 You see, my mother's ancestors came from Argyll. They are likely to have come originally from the shores of Loch Awe (north-east of Kilmartin) in the late 17th/early 18th Century, one of the ancestral lands of the McArthurs. By the 1780s, there is firm evidence that the shepherds had become surface miners down the peninsula at Campbeltown. The rudimentary mining helped power the whisky stills; my great, great, great grandfather McArthur would have had coal dust on his face.

But back in Kilmartin, and from the late Neolithic period, there are numerous examples of cup & ring markings carved into earthfast rocks and standing stones. There are various theories behind what they mean; symbols to indicate ceremonial worship, perhaps a map of the valley showing new settlers arriving on the western coast where to travel, or a depiction of the stars in the night sky. 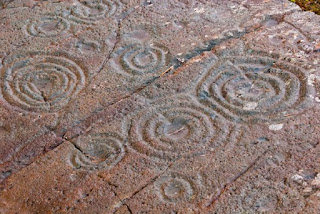 But suspend judgement for a moment. Imagine standing in Temple Wood on a winters evening in 3,500 BC. There is a sharp frost, deer from the woods are grazing nervously. The clear night sky provides a starry canopy from horizon to horizon. A dweller from the Glen looks up. She spots an amazing streak with a blue tail, then a white tail. She falls to the ground, fearing the worst, but the comet passes. The next morning she describes the sight to her fellow settlers. One of them starts carving ring marks and lines to represent the apparition as it travelled across the sky.

There is a feeling of permanence in a landscape like Kilmartin. Stones that have been set and carved by ancient hands, stand today as a legacy. 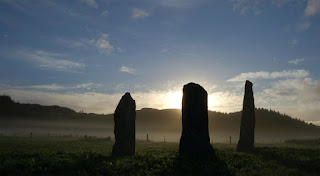 Stand in Temple Wood, listen to the birds, see the sheep grazing nearby, see the leaves fluttering in the wind. History & pre-history sits firmly on your shoulder. 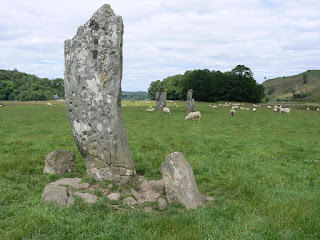 Yet the world of the 21st Century has a distinct feeling of impermanence; concrete tower blocks demolished after less than 50 years, workplaces that come and go in corporate takeovers, transient social media. MySpace becomes nobody's place. Big data is a fad one year, gone the next. We produce reports about targets that matter only in the moment. We blog vacuously about what we have had for dinner, our own self-importance and how HR is like some bloody science fiction movie. Fucking hell, some of us have truly vanished down the rabbit hole. We have lost our connection with the landscape, the seasons, our roots; and at times our very soul & identity. 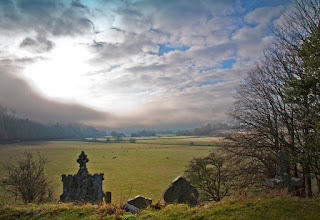 So what is the true legacy that we leave as workplace professionals? Do we leave a record of comets in the sky, an inspiring legacy to future professionals? Or do we leave nothing but transient coal dust from our grubby workings in the policy & procedure mines?


Let's actually change things for the better. Let's make our workplaces more humane by adopting a holistic approach to situations and applying multi-disciplinary perspectives to organisational issues. Let's be creative, let's be build. Let's build the future of workplaces around the concept of interactive communities where there is balance, care, reciprocity and friendship. Let's be altruistic and show compassion to our people. These are the twin tails of the comet, white & blue.

Let's stand in Temple Wood and create some permanence & meaning. 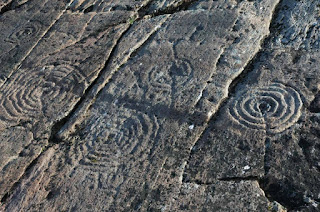 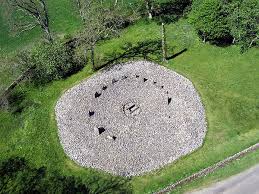