Until a teenager, I grew up in leafy London SW19, better known as Wimbledon.  As a result, although I am not a fanatical sports fan, I do have a soft spot for tennis.  The Wimbledon Fortnight was always a slightly challenging time of the year for local residents, the Village was festooned with purple and dark green (the colours of The Championship), all streets were lined with no parking traffic cones, the church field turned into a cream tea venue manned by Brownies, celebrities moved into houses around us (as did the press) and I will never forget my mother’s frustration the time that a stranger, clearly desperate to find somewhere to park, left their car in our front drive, blocking us in.


Aged twelve, I became a bell ringer at the local church (St. Mary’s - the one with the iconic spire that you see in the panoramic views of Wimbledon).  We campanologists were able to climb through the bell loft to the platform around the base of the spire and look down on the Lawn Tennis Club from our eyrie on the steeple.  The applause for a great game, set or match carried up to our ears and we feasted on strawberries and cream to celebrate the occasion.  Happy memories - it is such a shame that the church spire has been damaged by parakeets and the ravages of time ( http://www.bbc.co.uk/news/uk-england-london-23148638 ) - it is clad with cedar wood tiles, known as shingles, which are now brittle and hence have been easy for the birds to prise off, thereby enabling their access to shelter.  The damaged cladding has allowed the elements to further damage the edifice.  £100,000 is needed to repair it - if each Wimbledon fan donated £1 the church would reach its target before the end of this year.  For more information and if you would like to do something to help please visit www.stmaryswimbledon.org , text SPIR19 with an amount or visit www.justgiving.com/spiresw19 .

In perhaps more globally noted Wimbledon news, Andy Murray’s straight set win in the Men’s Final was magnificent.  All of us should take note of his ability to follow the advice  of his fellow Scot, the arachnid-watching Robert the Bruce - who supposedly said “If at first you don’t succeed, try, try and try again” - before he trounced the English at the battle of Bannockburn in 1314.  Murray persevered until, eventually, he achieved his goal.  Good things are seldom easy (witness his tears at coming second in 2012) and they are usually not the result of good luck, they demand dedication, hard work and determination.  The golfer Gary Player is credited with saying “The harder I practice the luckier I get” and Murray’s practice regime (including the ice baths) was gruelling.  He deserves the respect and accolades he is now receiving.  It has been perhaps the most important week of his career.

I’ve had a big week too.  This was the commencement of my time as an elected governor of Guy’s and Saint Thomas’ NHS Foundation Trust.  I have had two meetings this week, part of my induction to learn what is expected of me and my peers, to meet important people from the Foundation Trust and to become acquainted with my colleagues.  I am humbled by the knowledge and experience of all those whom I have met.  These are demanding times for society and the NHS that cares for the people within it.  The breadth of Guy's and Thomas' operations are breath-taking: they range from the provision of care in the community; the employment of world-leading consultants and medical staff pioneering treatment and appropriate care approaches within the hospitals; historic museums providing a glimpse on what has been; and the training of the next generation - the teaching hospitals provide actual hands-on exposure and learning to many of the medical students learning in London.

How can I add value?  I have been elected to represent the public of Lambeth.  There are so many issues facing the Borough and its people - reduced funding, wide ranging needs, an ageing population, cultural diversity that requires linguistic skills as well as sensitivity and understanding, challenges including how to have a two-way channel of communication so that people know what is being done/is available to them and to ensure that the Trust is providing what people need and want.  Despite coming from medical roots (my maternal grandfather was an eminent professor respected, amongst other things, for his involvement in the design of the iron lung and my uncle championed the establishment of health provision in parts of Africa and the Middle East), I am a former lawyer who works in Human Resources.  I would like to appeal to all who are interested or who wish to let the Foundation Trust know of matters that concern them, to reach out to me - by commenting here or contacting me via Twitter ( @KateGL  https://twitter.com/KateGL ).  I genuinely want to help. 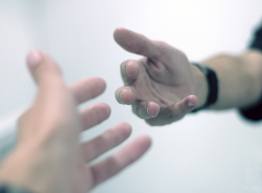