Down in the Dirt


It gives me great pleasure to introduce you to Paul Clarke, the author of today's piece - given the time of year and prevalence of office parties, the publication is timely. Paul had a high flying career in management consulting (advising public sector organisations on their IT strategies), prior to seeing the light and following his passion to become, in the space of less than 5 years, one of the UK's most respected "real time image creation" and event photographers. In 2013 he was listed, by Professional Photographer magazine, as one of the Top 100 Photography Heroes; in 2014 he won the Professional category in the Event Photography Awards and judged the event this year. Paul is inspirational on many levels - perceptive, creative, fiercely bright (he studied Engineering, Economic and Management, Information Management at Oriel College, Oxford), aware of his own weaknesses and always prepared to question and challenge. I first met Paul via Twitter, and have subsequently become a client - he took some brilliant photos of family and friends at my eldest son's 21st - and he is also a friend. He introduced one of our new blogging voices via the Adnet Blogs series last year and I am delighted to have him with us in 2015. Chatting with Paul is always a pleasure, so long as you don't mind surprises and debate. He is a fine wordsmith - try out his photography blog - or else enjoy his company on Twitter (his handle is @paul_clarke).

NB Paul had no involvement in the photographs used to illustrate his post.

It's just after midnight, on a train outside Purley. Not quite the last train – now that would be a special hell – but pretty rough all the same. It's mid-December; most of the people around me have been hitting it hard today. The signs are everywhere. 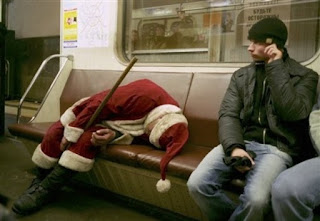 The grey-haired guy in the camel coat slumped down over his bag, drool running from the corner of his mouth on to the crumpled Standard beneath. The pale, sweaty woman by the door, fingers playing nervously with her big handbag. The puker-to-be. 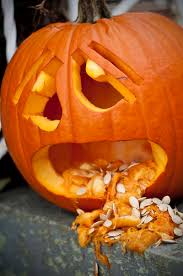 It's not overt violence that hangs in the air so much as sadness. Ten big lads have taken over First Class and are noisily stuffing down burgers and beers. Anyone mug enough even to approach the door will be washed back on a wave of Stella Bantois. A young woman is asleep in the space by the doors – everyone who passes her looks nervous, then guilty, as they're not sure whether to wake her and tell her which stop it is. But you know, these days, can't be too careful... 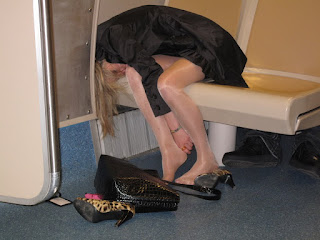 The office parties, the quick drink after work, the we-said-we-must-catch-up-and-it's-nearly-2016. The unwrapped Secret Santas, the soggy party-hat, the quarter-full bottle of Prosecco under the table. The champagne and the shame and the pain. 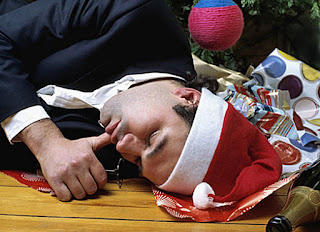 The train's been stopped for a while, and my thoughts travel back seven Christmases. That was me – guy slumped over the bag. Or sometimes the red-faced and shouty one. Or the one looking for cabs at Horley having slept right through my stop. Sad and sick. Drinking problem, you see. Call it what you will – call it alcoholism, call it wrong-life-wrong-job – the problem bit would always show up at that time of night in one particular way. 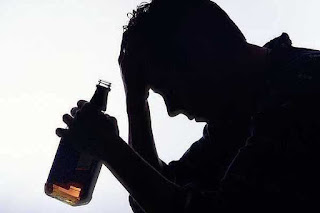 I could not – whatever had been happening earlier in the day or evening – I COULD NOT get past the Whistlestop at Victoria without dipping in for a quick bag of “travellers”. Four tins (at least) of the strongest beer they had. They didn't stock the super-strengths. (Pro-alkie-tip: neither do Waitrose, but they DO stock the Belgian Trippel stuff – it's pretty much the same, and the neighbours won't be shocked. Middle-Class-Special-Brew.) 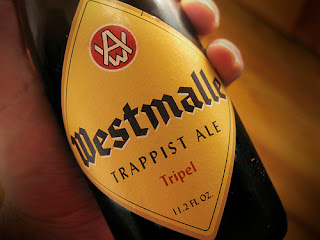 So that was a drinking problem all right. The first would be empty by the time the train pulled out. The second not looking so healthy by Balham. And neither would I. Three was reserved for the delays around Selhurst, and four would be dispatched just before home. Wouldn't want to come in the door clutching booze, would I? Now how bad would THAT look?

I was down in the dirt. Covered in the grubby coal-dust of modern London life. Stuck down a mine of my own design. I remember one similar train journey, a few years ago, when someone had left a copy of The Sun on the table. The front page was some screaming headline about the Budget, and proposals for higher booze pricing. “CHANCELLOR TO PUT A TAX ON FUN” or something like that. Fun. All that fun. I've never seen that particular F-word in the same way since then, if I'm honest. 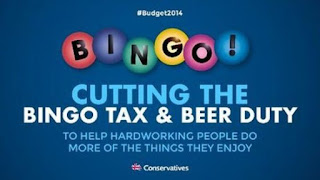 How could I cope without all that fun? I'd be ostracised, apart, ridiculed. “The Other” at all those parties. What if Secret Santa wasn't actually funny, sober? Imagine that. In time it turned out that none of those fears were real (apart from the Secret Santa one). But that's for another story.

Anyway, back to dust and dirt and darkness. Thing about even the most insignificant and blackest dust is that you can turn it around and see it in a new light, and it will show you glories unimagined. 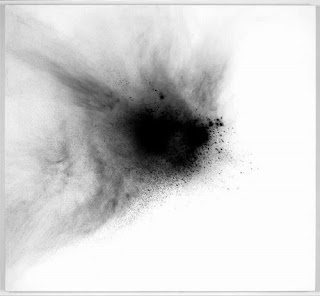 Take the comet: thousands of years lost in space, dark, scared, alone – frankly a bit of a mess. If Carlsberg did alcoholic space objects… But put it in the right place, look at it in the right way, and that dust streams out into the most vivid and striking tail. All that darkness, let go, and reimagined. Even bright enough, I'm told, to be seen through the rain-streaked windows of a signal-limping commuter train in south London. 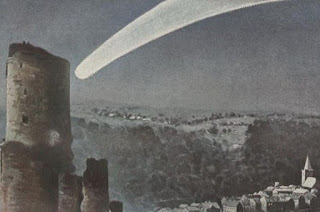 I was lucky. I found the sun, and set my face to it. The dust streams, and now I blaze.

Good luck finding yours, wherever it may be hiding.