Not to be taken Lying Down

In the middle of January I was invited by my 8-year-old goddaughter to participate in the Flat Stanley Literacy Project. 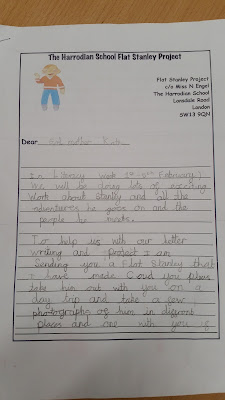 The Project is a wonderful example of the power of making connections and establishing communities to encourage and share learning. For those who don’t know, Flat Stanley is the lead character in the children’s book published in 1964 by Jeff Brown and illustrated by Tomi Ungerer. 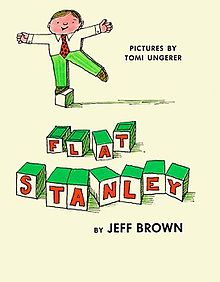 A Canadian teacher, Dale Hubert, started the Flat Stanley Project, in 1995, to encourage letter writing, but it also enhances an understanding of geography, and potentially other subjects such as maths and sociology. In essence, each participating child makes a Flat Stanley (a paper cut-out of the character) and sends it in the post to someone else. The recipient does something of interest accompanied by Flat Stanley (it can be as simple as a trip to the shops or a day at work) and then writes a letter about it, which is sent (along with Flat Stanley) back to the child. It has been a privilege being part of it and, in a hope that it might encourage others to become involved, I am going to share with you my letter. 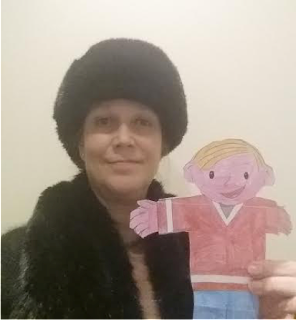 It was a delightful surprise
to receive your beautifully written letter and to meet Flat Stanley. I know that he is used to travelling inside envelopes when he goes to visit friends, but he did say that it was quite a bumpy journey to Stockwell, perhaps it was being stuck in a post-bag with all those thank you letters that people send after Christmas. (By the way, thank you for mine; I’m glad you liked the secret code stuff and our trip to the ballet was wonderful). Flat Stanley was clearly relieved to get out of the envelope, as you can see in this picture of him and me.

Flat Stanley arrived at my house on the 16th January.  He and I were very excited to be going on an adventure together and we decided that we would like to have a night out, looking at the lights and sights on the last evening of the Lumiere London Festival.

We travelled into London by Tube; 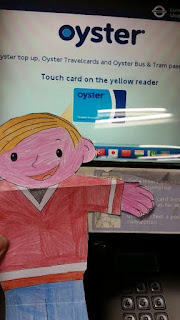 Stanley had to buy an Oyster card before he could get through the gate. 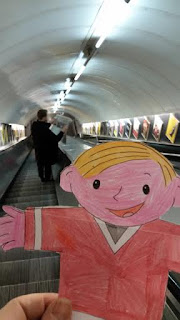 He loved the escalator.

We went on the Victoria Line to Green Park station and then walked down a grand road called Piccadilly that is full of smart shops and hotels. It was dark and there were lots of excited people crowding around us. The Lumiere London festival is the first time that artists who use light in their pictures and sculptures have put on an exhibition in the centre of London. Stanley and I looked up and saw the statue of a man sitting, glowing, at the top of a building. 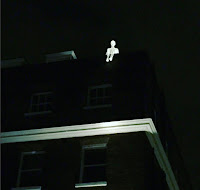 There was another shining man who appeared to be flying in the sky. 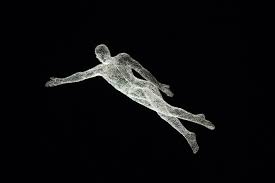 Flat Stanley and I stared up at them and knew that we had an amazing evening ahead of us. 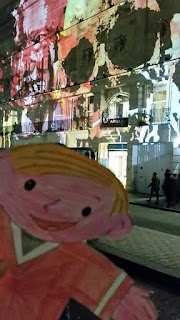 Further down the road a large crowd of people were staring at a wall that was covered in the colourful, changing faces of film and TV stars. 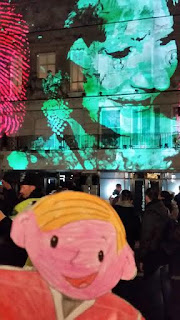 They were on the front of the building known as BAFTA, where films and their actors, cameramen and directors are recognised and awarded prizes.

As we walked along we heard music playing and the crowd around us started moving faster, there was clearly something exciting for us to see. 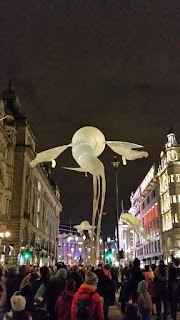 Ahead there were lights and strange creatures that looked like huge fish floating in the sky. Flat Stanley and I stood and watched them in awe. 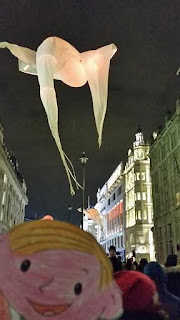 Then a loud trumpeting sound made us search down a side road and to our amazement we found an elephant’s bottom in the archway above our heads. 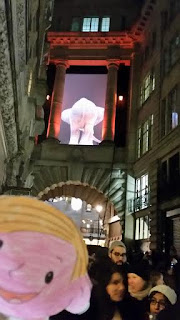 No wonder it was trumpeting loudly, it was clearly stuck. We walked to the other side of the arch and there was its head 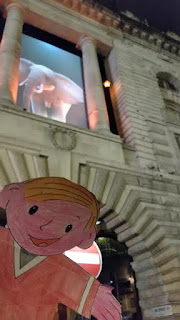 - Of course it wasn't a real elephant, just a 3d image, but it was cleverly filmed and it made us smile. 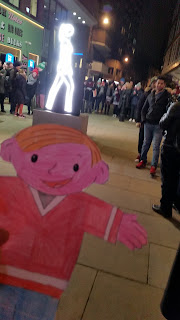 and little men made of lights, who chased each other and seemed to tumble down the side of a building in Regent's Street. 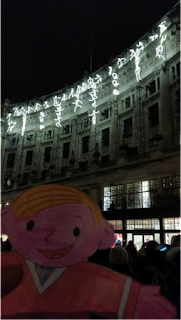 Flat Stanley liked what looked like a large fishing net, hung over the road at Oxford Circus, which kept changing colour. 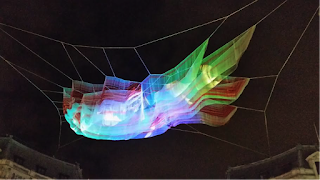 But where were the fish you could catch in that net?

We found them in a telephone box!!! 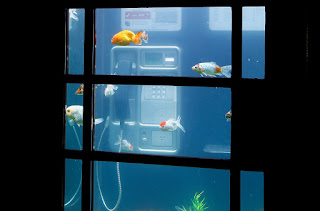 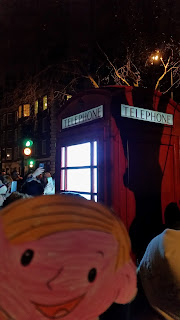 Being flat himself, Stanley became quite excited when we found a field of flat, friendly faces that were lit up in a park called Grosvenor Square. 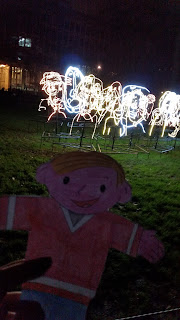 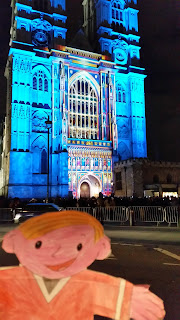 – the saints appeared to glow as if they had been painted by light. It really was wonderful. Such amazing colours and I don’t know how they stopped the lights from smudging into each other. 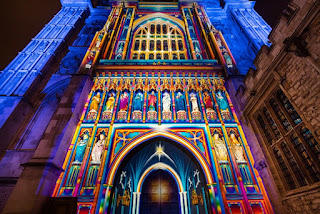 But it was getting cold and late, so we decided we would head back home.

We walked past the Houses of Parliament (you can tell how late it was by the time on the clock face). 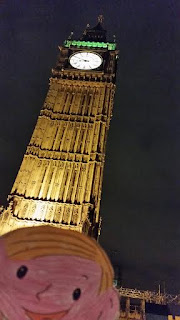 Flat Stanley enjoyed the view from the bridge. 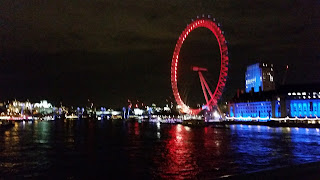 I hailed a taxi. 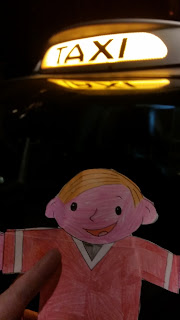 As a treat, I took us back to my home by cab.

Flat Staley sat exhausted on the back seat, much to the amusement of the taxi driver. 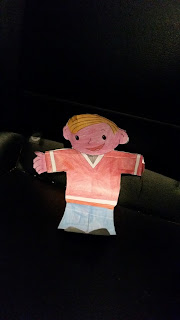 When we got home he fell asleep in a box. 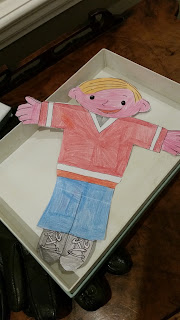 Flat Stanley and I had a wonderful evening - it was exciting walking together in the dark. Thank you so much for sending him to stay with me. I hope your Literacy Project at school is fun – I look forward to hearing all about it.

Lots of love from

During the course of our adventures I tweeted and shared pictures of Stanley, while we wandered the streets and parks of Mayfair, Picadilly and St James'. My comments were picked up by the Artichoke Trust, the charity responsible for producing the event and encouraging both locals and tourists to see London in a new light.

It was fun to connect and be able to thank the creative minds who had brought such amazing sights and artists to so many. Flat Stanley and the project is well known around the world and people commented on seeing Stanley on Twitter and encouraged us throughout our walk. You can see some of their comments at the bottom of this post.

It was an odd feeling when the time came to post Flat Stanley and the letter to Sophie - although he had only been with me for a couple of days, I had grown quite fond of the little fellow. Sophie's mother sent me a photo to confirm that he had arrived safely back at Sophie's school and was taking part in the class' wall celebration of all the Flat Stanleys' adventures. 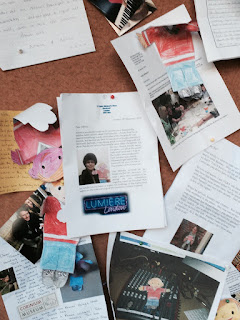 It had been fun. I experienced and gained so much throughout my involvement in the project - none of us is ever too old to learn or to revel in the enjoyment of sharing things with others. Thank you Sophie for inviting me to write to you and for introducing me to Flat Stanley. In a small way all of us involved have helped towards encouraging literacy, enhancing understanding and fostering the benefits of connecting - subjects that should never be taken lying down.

In reply to Kate Griffiths-Lambe

James Pike ‏@jamespike29  Jan 17
@KateGL this has just made me resolve to buy Flat Stanley to read to my girls. Absolute classic.

In reply to Kate Griffiths-Lambe

Sarah Storm ‏@_sarahsto_  Jan 18
@KateGL @jeffwren1960 Flat Stanley is a great book. It has been a joy to see him again, experiencing #LumiereLDN

Michael Carty‏@MJCarty
@KateGL Keep persisting - I'm sure Flat Stanley appreciates the trip out and the holding up, too! : )

Jeff Wren‏@jeffwren1960
@KateGL Where does your Flat Stanley come from? Bringing back memories as he was a younger brother favourite
8:48 PM - 17 Jan 2016
0 retweets0 likes

Posted by KateGL at 03:02 No comments: Links to this post