Day 40 (9th January 2015)
Today we have an exploration of foundations and friendships by Karen Teago. She makes the point that, like books, it is a mistake to judge a person by their initial appearance, as it is what's inside that matters. Karen, a lawyer by qualification, is a respected consultant and director of Gravitas HR Solutionshttp://www.gravitashr.co.uk/. She is also an active voice on social media, we first became acquainted via Twitter (her handle is @teago_emplaw) and then through the second edition of the crowd sourced Book of Blogs, This Time It's Personnel.


I’ve just had a magical weekend with two girlfriends.  Pretty much every year for at least the last 10 we have been away for a weekend, just the three of us. Although we have ventured to Cardiff and London over the years, our favourite haunt is beautiful Bath – where we met at University 20 years ago. 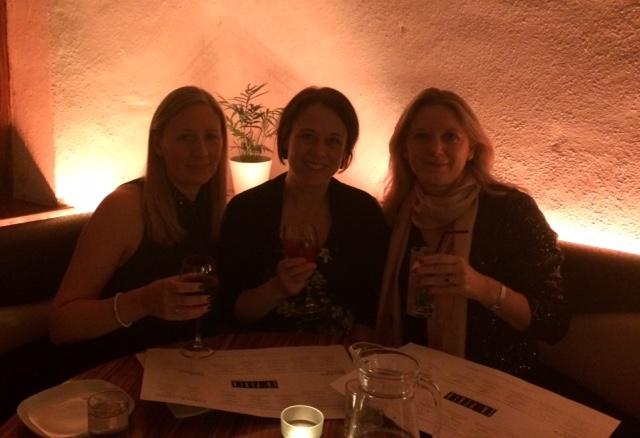 From left: Anna, me, Kate.
I chose Bath University, not because it had the best reputation for my degree course, but because I rather liked the city when I visited on the open day.  I was to read Sociology and I figured that one Sociology course would be much like another, wherever I happened to be.  It would be fair to say that my primary objective was to leave home and enjoy a University lifestyle, as I had no idea what I wanted to do when I left.  I had studied for A Levels at a local FE college rather than a traditional sixth form, mixed with people on all sorts of courses and from all walks of life including plenty of mature students.

So I rocked up to Bath in October 1993 with a bit of an attitude, it would be fair to say.  I felt confident and streetwise (although secretly I was as desperate as everyone else to find friends and settle in).  I looked a complete state.  My University wardrobe consisted of leggings in every imaginable colour, long T-shirts, and Doc Martens with steel toecaps *shudders*. 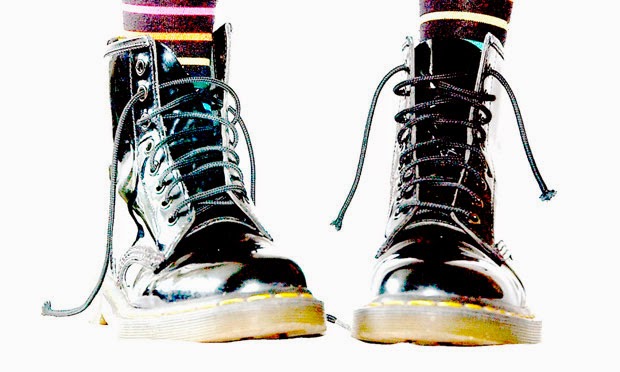 I was placed in a house of 11 girls and was delighted to find that one of my house mates, Anna, was studying Sociology with Psychology and would be doing the same compulsory subjects as me in the first year.  I later discovered that she could not have been any less delighted by this, as her initial impression of me was of a loud, brash, overbearing and all round scary girl with way too much eyeshadow.  She shed a few tears when confiding all of this to her mum via pay-phone on that first weekend, a fact which now makes us giggle.  Looking back now, neither of us can quite believe how we both changed and I am so grateful that she didn’t allow her first impression of me to be her ultimate judgment. 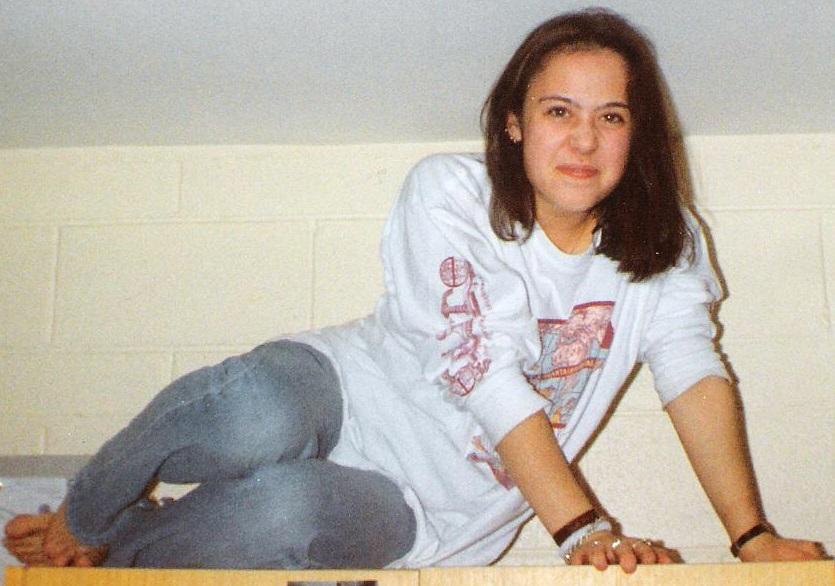 I’m on top of a wardrobe – that’s how I rolled in 1993.
A rare legging-free moment.
As the ratio of men to women was roughly 2:1, we were surrounded by houses full of boys.  In fact, the first 20 houses in our section of campus had only three girls’ houses and we enjoyed the attentions of our neighbours from day one. Apart from one guy in the next door house, who was two years older than us (which is a big gap when you’re 18).  He seemed to keep himself to himself and spent a lot of time in the library which we all thought was most odd in the first term of the first year – no-one was really doing any work that term….were they? He spent all his time in leisure wear and was dubbed Tracksuit Man by one of my housemates.

If we had been pressed then to guess what Tracksuit Man thought of the gaggle of girls in House 4, I think we would have guessed right.  We now know he thought we were immature and silly – a view compounded one fateful night when we’d all had rather too much to drink and Anna was shuffled outside for some fresh air.  Her drunken ramblings at the top of her voice were, unfortunately, right outside the bedroom window of Tracksuit Man.
Fortunately for Anna, Tracksuit Man – whose name is Dave and who no longer lives in leisure wear – didn’t let his first impressions of her be his ultimate judgment.  They eventually became friends, fell in love in our final year at Bath and they married in 2001.
Anna wasn’t enjoying the Psychology element of her course, and was exploring options for a subject change.  I realised that a work placement during my University course would be a worthwhile activity (or possibly I’d realised that all my friends were on 4 year courses and I most definitely did not want to be in Bath on my own for my final year and graduate 12 months before them all).  So it was, that we both moved on to the Sociology with Industrial Relations course after the first year (which was common across all of the Sociology courses and therefore we could do without re-sitting Year 1).  By this time we were firm friends, living together in a shared house with three guys, studying together and getting into regular drunken scrapes.

There was a girl called Kate, whom Anna and I began to get to know in Year 2 as a result of this change.  It was my turn to be scared.  Kate knew exactly what she wanted out of life, she wanted to be an HR Director.  She had chosen Bath because it was one of very few places that offered the Industrial Relations option.   If you cut her in half she would have had the word “FOCUS” written right through her.  It freaked me out that someone could be so certain of their career choice and route to the top at just 19 (by the way, she does now admit it was pretty weird).
Kate apparently tore through the first year of her IPD (as it then was) qualification whilst working full time on her placement year – she was already totally in tune with the people management vibe.  However some of the more theoretical degree topics didn’t come any more naturally to her than they did to the rest of us and she worked like a Trojan to maintain her average to graduate with the degree class she needed.  Her work ethic put me to shame as she studied 8 hours a day whereas the “just in time” production we were learning of in lectures, I applied directly to my coursework and I would throw an essay together the night before it was due in. Kate was already engaged when she arrived at University, which I found unbelievably weird. Not “engaged” in the way some people arrived at University, with a Ratners ring and a vague notion to get married at some point, if the relationship survived the long distance scenario.  No, Kate would marry in the summer after graduation and I believed her. She duly married in summer 1997 and I now know why she was so sure, because it clearly was always meant to be.
I am so pleased that I got to know her properly, because had I let my first impressions become my final judgment, I would not have the friendship with her that I now enjoy. 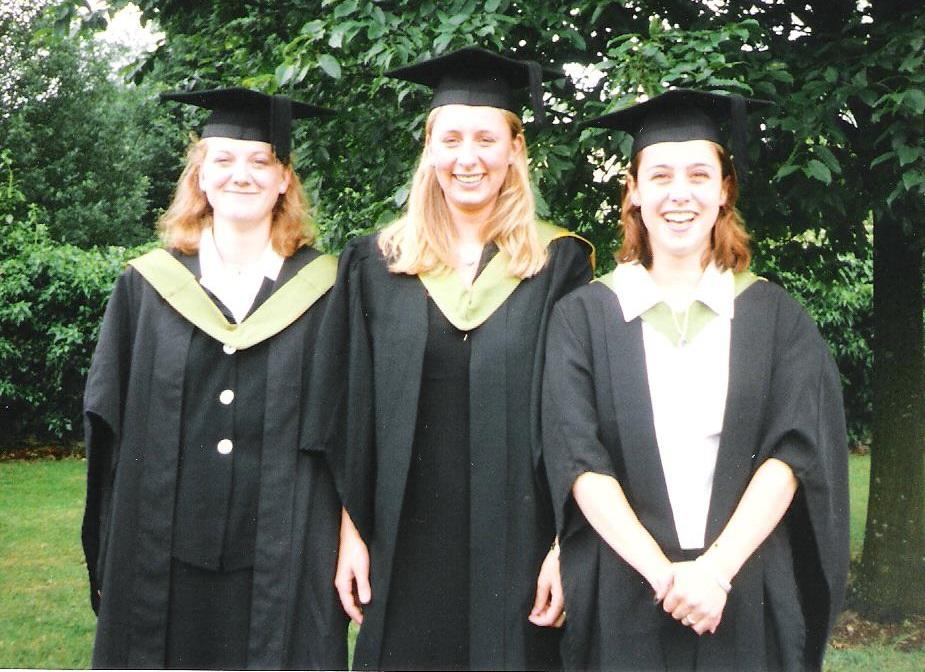 Class of ’97.  Does anyone actually suit a mortarboard?  Not in this picture…
We graduated in 1997. I had neatly sidestepped (more accurately, deferred) the issue of finding a graduate job by deciding HR wasn’t for me, borrowing from the bank and and putting myself through law school (as you do).  As those of you who know me will perhaps recall, I practised as an employment lawyer until 2010 before deciding that, actually, HR is for me after all.
Anna completed the HR graduate programme at a building society turned bank in Milton Keynes, before moving to the West Midlands to be with Tracksuit Man, sorry, Dave.  After 20 years in HR, she’s taking a break and doing something completely different for a while.
And Kate?  She completed graduate training at a car manufacturer in the Midlands (oh, the glamour) before moving to a top tier accountancy/consulting firm where she has been ever since.  She is an HR Director, obviously.

Our paths first crossed by happy coincidence, and the paths we have taken subsequently have been markedly different, even though the Industrial Relations element of our degree course has featured strongly for all of us.  All the way along, we have supported one another through challenges galore, laughed, cried, shopped, drunk, laughed some more, drunk some more.  How different would it have been if our original perceptions of one another had prevailed? 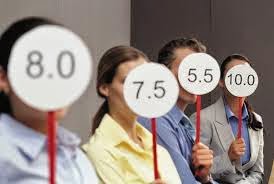 I cannot close then, without saying, is there someone in your life who deserves a second chance?  The overbearing person who is probably dreadfully insecure? The one whose life seems completely sorted, who looks serene as a swan on the surface but who is paddling like billy-o underneath?  The know it all who, actually, just wants to be liked?  The one who never seems to make an effort to speak to you, who secretly would like to be friends but doesn’t know quite how to start a conversation?  Someone clad entirely in leisurewear?
Reach out to them.  It could be the start of something beautiful….