Day 32 (Monday 1st January, New Year's Day 2018)
Happy New Year! I wish you a wonderful 2018 full of love, good health, happy times and meaningful moments to treasure. I look forward to sharing bits of it with you.

I can think of no better way of starting the New Year than by reading a post from Neil Usher. I first got to know Neil when he was the Workplace Director at Sky - he was one of the truly innovative property and facilities experts who understood the impact that the workplace has on work, the people within it and the wider environment. Neil took the brave step to become a freelance specialist just over six months ago, which has also enabled him to find the time to write a book due to be published in March. If you wish to know more about Neil's thoughts on work and workplace design, you can find him on Twitter (his handle is @workessence) or better still, read his blog: workessence.

To me, the Advent Blog series would be diminished if there was no creative piece from Neil within it - he is an exceptionally talented writer. It has been a long standing tradition in northern hemisphere cultures to tell stories to brighten dark winter days and I see Neil's tales as a perpetuation of this custom. To maintain the flow, there are no punctuating illustrations. 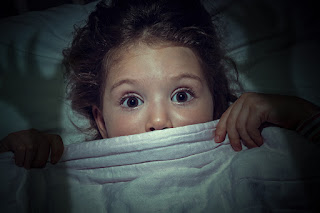 Pearl was afraid of the dark.
At least that’s what she told her parents.
They gently questioned and wove a scaffold of fine thread into her curiosity to help her through the nights that could seem interminably long. At this time of year, the excitement added another dimension: keeping her awake, when she wanted to slip past the darkness, unaware and relieved.
Her magenta-washed room was dotted with pins of light – those that stayed on, those that sensed when they needed to be on. Until one evening when the entire neighbourhood was softly sunk into pitch, unannounced. Pearl was deeply submerged in sleep at the time the clocks stopped, but something stirred on the seabed and she began the long ascent to the surface.
When she awoke, her eyes flickered, there was no difference. She blinked, rubbed her eyes and opened them like saucers. It was as though she were staring into the back of her eyelids. She could feel her skin warming, her forehead moistening. This was not right. Her pathway was gone. She was lost in a space where she was safest.
But as she strained to make sense of the slowly returning familiar shapes before her, the darkness about her began to collect itself, the air moved in ever-tightening elliptical coils around her, gathering like candyfloss. Pearl was rooted upright, as a human form appeared at the end of her bed, resting its hands on its knees and tilting its head to one side. It had a familiarity, it seemed to be everyone she knew, everyone she had ever known. A soft ochre light appeared around the shape.
Pearl could not speak, nor scream, yet something about her new companion exuded calm. It was not how she expected to feel.
“Hello Pearl. Don’t be afraid. Easy for me to say, I know but I would rather like to explain myself, if you don’t mind’ it said, in a quilted whisper, a warmth in its voice. ‘I’m the darkness all about you.”
Pearl was unsure, but calm.
“Do you always sit at the end of my bed when I’m sleeping?”
“Oh, no. I’m here for everyone. But I look after you every night, I’m all around you, looking out for you, helping you sleep. When you worry about me, I’m sad. But there is nothing I can do. I know you’re looking forward to seeing my friend, Dawn, and would rather I left.”
“She’s real too? Is she really your friend?”
“She’s my only friend, but we pass by one another slowly, wishing we could be together our hands slip through one another’s. We are the only ones who understand each other. But we never can be.”
There was a moment of stillness, as they both considered the impossibility.
“I’m not scared of Dawn” Pearl reassured herself.
“Ah but there are many who love the darkness of the night and fear the Dawn. A new day for them is terrifying. It means facing things or others they would rather avoid. It can mean making decisions they would rather not face. Sometimes it’s simply the heaviness in their own heart.”
“I can’t imagine being scared of the daylight. But I know people who are sad all of the time. That must be what’s happening. They never say so.”
“It’s rare that people do. It’s easy to say you are afraid of the dark, but it’s hard to admit you are afraid of the light.”
“But what if you and Dawn could be together? Then no-one would need to be afraid.”
“We are different, Dawn and I, and there is nothing we can do about it. We cannot change ourselves, like you can. And we’ve had much longer to try. But we are both here for everyone.”
“If you’re here for me, why am I scared of you?”
“Things that worry you feel bigger in the darkness, much bigger than you. You can’t do anything about them, you have to wait. It can seem like there is only you in the world, that you are the only one awake. So, people think of darkness as bad, and light as good. But there cannot be one without the other.”
Pearl looked puzzled.
“So, Dawn wouldn’t be here without you, and you wouldn’t be here without Dawn. Yet you can’t be together?”
“Exactly. We give each other meaning. You have to have us both.”
“So – you make it possible for me to love the Dawn?”
“Yes indeed. You just need to think of us both, looking out for you, but never able to do so together. We would want nothing more, but we can never do so. So, it helps us to deal with that, if we know you care for us both equally.’
“I will - err, I do. “
“Now, I have to go back to the way I appear to everyone, but I can only do that when I know you’re not scared of me. It’s been a white night for many while I’ve been here with you, and I can’t have them being anxious, can I?”
Pearl nodded and settled.
With that the form dissolved, unfurling into an undulating dream.
Pearl awoke to fractal shards splayed through her blinds. It was much later than usual. She hadn’t noticed the breaking of day, as she often did.
It was New Year’s Day. Pearl was happy. Something had changed.