Sunday 30th December 2018
I hope you are enjoying a peaceful and relaxing weekend - the last one of 2018. Things are calm at my end - despite a few heated discussions about the seating plan for my son's 21st party. I must confess, not counting the current debate about the party, much of this year has been challenging. We have achieved a lot at work and I have a wonderful and award winning team, but family matters have been tough. I won't miss 2018 - it has had some scarring and serious low points/complications and I dread the early months of 2019, as the dust has yet to settle. Perhaps that is what inspired be to this year's theme for the Advent Blogs - Heartache, Hopes and High-fives. Roll on the high-fives...

Our contributor today is Paula Aamli, a highly intelligent and inspirational lady who has already done much to make the world a better place. She deserves a high-five just for being who she is. She has a First Class Degree from Oxford in Modern History under her belt and a Masters with Distinction from Hult Ashridge, in Sustainability and now she is a doctoral candidate on the Executive Doctorate in Organisational Change, at Hult Ashridge, where Steve Marshall is her supervisor. Her topic of interest is around organisational change to support more sustainable business and personal lives and she is very interested in creative methods (hence the photography and the poetic writing below - NB all the photos are Paula's own work, except for one taken which was taken by her partner). Given Paula's background one perhaps should not be surprised at her area of academic study...she has worked within the Not for Profit arena as an Appeal Manager for Christian Aid and then the Development Director for The Brightside Trust when the charity was just establishing itself, before moving into Financial Services.  She has championed accountability and ethical conduct at HSBC for many years as well as helping people within the bank to develop and grow. Since June she has been the Head of Governance and Control for the UK Private Bank, working directly with the CEO and the top team. Paula is described by those who know her as dynamic, energetic and possessing a ruthless attention to detail. I am sure that you will enjoy her post. Paula is on Twitter - her handle is @paulettya. 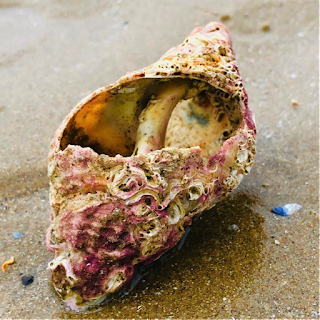 The shape of this year’s holiday break

For the second year in a row, I’m spending nearly full two weeks over the Christmas break tucked amongst the creaky drafts of an old house that stands braced on a hillside overlooking Carmarthen Bay.

I have hungered for this retreat from city crowds and work deadlines, but now that it is here, I resist the slowing that this place calls for in me, with its large horizons and small settlements, the subtle beauty of its muted colour palette, the grey-greens and grey-blues and grey-browns that offer unblinking contrast from the neon brights of Regent Street, where my everyday commute-path so recently took me.

I expected to transition effortlessly, gracefully, into unscheduled expansiveness.
It was, after all, whilst hidden here last year that I started really paying attention to how it felt to take time away from my blue-light screens and nerve-end-twitchiness of constant deadlines and to drift, aimlessly purposeful, through that large, cold, damp sand-landscape. Reader, it felt great.

I found a dawning conviction that spending deep, unhurried time in nature changes something in humans (in me!) that desperately needs shifting if we are to move away from lifestyles based on casual, unthinking gouging of the environment that we depend upon and which sustains us.
As a wanna-be organisational change practitioner, I also had a conviction-that-looks-a-lot-like-a-hope that this change can (and does and will) lead to better decision making, better outcomes and better quality of experiences as individuals and networks and communities and organisations.

So I was looking forward to resuming last year’s cozy communing, but with the benefit of the work and wondering and wandering that I have lived in the meantime.  Apparently it doesn’t work like that; seems that you can’t start where you were, that you have to start where you are.

Where I am, this year, is finding that I unexpectedly miss the un-picturesque little loops of paths, tracks, parks and pavements that I have strolled and traipsed and marched through in my corner of East London in the last twelve months. And thus it came to pass that over Christmas 2018, I have called upon my most precious, efficacious super-power, gifted to me by my Irish great-grandmother by way of my Welsh mother: the gift of bloody-mindedness.

Reader, it has been less of a joy and more of a grind, but I have walked, faithfully, every day, anyway. In the spirit of “eat-your-veg/do-your-homework”, I’m betting on persistence paying off in the long run.

Every day, then, as the sea-water creeps back from the land, revealing the wide expanse of the low-tide beach, I have donned wool socks and plastic shoes, a rucksack or shopping bag, and of course, my faithful iphone to tick off the footsteps (if my app doesn’t track a walk, did it even happen?) and set out. Sometimes I walk alone and sometimes S comes with me. Our front door to St Katherine’s Island and back is a solid 4 miles but can only be completed when the tides permit.

It has become an informal family tradition that we pick up plastic litter from the shoreline as we walk. Every time, I marvel at how an apparently pristine beach yields up so much rubbish once you start tuning in to looking for it. I also bless our fortune, with every footstep, that being situated on a tucked-away corner of the planet that is not opposite the sloppy sprawl of some great city, we are chasing the detritus left by tourists and trawlers but do not have to contend with the plastic avalanche of so many consuming bodies. [But the ghost of the Sea Empress oil spill whispers in the air as I type this.] 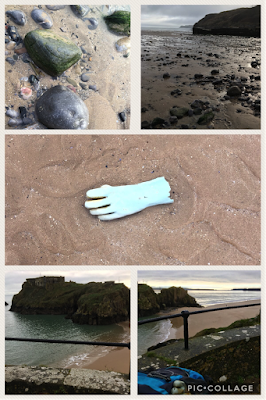 Every day has been a walk just for the sake of walking; every day except one. Christmas Eve was my dash-of-shame into town, alone, for some last-minute Christmas presents, but the miles still called me.

I shrugged the loaded rucksack onto my shoulders, clinking with Christmas gin. A large shopping bag in each hand, I set off for the western edge of the beach, one and a half (ish) miles away. I trudged across damp sand, bags flapping when the wind occasionally caught them. Tenby “mist” settled on my face and on the shopping bags as the lowering cloud stooped down to touch the beach – but the bags weren’t heavy and the presents seemed to be coping ok with the gentle overlay of rain.

It’s a long and, relatively speaking, featureless expanse of beach that serves as part of the Pembrokeshire Coast Path, after walkers drop down from the clifftop path on Giltar Point. People travelling in opposite directions can see each other approaching across the full length of the beach, slowly expanding from small dark distant specks to fill out human stature as we finally draw towards passing each other.

An older couple were walking towards me, well-kitted-out for the weather conditions. Mindful of the season, I made eye contact as we reached a passing point; then, to my reserved, British astonishment, the lady started towards me, smiling. “I just wanted to say”, she said – “what a surprising, lovely sight you make. A lady who has done her Christmas shopping and is carrying it home along the beach, looking for all the world as though she is heading off into the middle of nowhere. Well done, you.”  A smile and a brief exchange of Christmas greetings and she is gone. “High five!” she didn’t add – but I can see how, in another context, that would have been the obvious sentiment.

It was a memorable moment for me, not just given the shock of experiencing two British strangers finding it in themselves to chat, unprovoked, to each other, in public, but also because I was genuinely taken aback to be seen as doing anything out-of-the-ordinary. Just me, just walking home. Just carrying my hasty last-minute shopping because I’d been too disorganised to do it sooner and bring it down by car. Of course, I had the advantage of knowing that there’s a village just beyond the sand dunes at the non-town end of the beach (assuming that the lady I was speaking to isn’t a Pembrokeshire local).

Hope and heartache mingling on the sea edge

I suppose the other thing of note here is that – chore or otherwise – I don’t really experience the beach as empty or ‘other’. This beach seems full – teeming with sea-life, sure, but also full of hints and vestiges of the long life-story of the earth that has created it.

I look at the sand of the beach and I remember the long ages that ground rocks to make it – and the longer ages before that where the rocks themselves were formed from the ancient life of the more ancient seas. I see generations of living things cycling through millennia to this moment, and cycling away from now into a vast, remote final future.

I find myself to be tiny and brief in context of this tremendously enduring earth history, which is immensely humbling of course, but also strangely comforting, somehow, that after all that has happened – that human consciousness exists at all, that I, specifically I, have arrived into my moment in the story, along with my friends and family, community and nation, and the wider nations that surround us.

Our problems are significant, but the earth will endure (until, in the very far distant future, it doesn’t). Maybe there are ways I can’t see yet that will enable humans to endure and continue along with it. 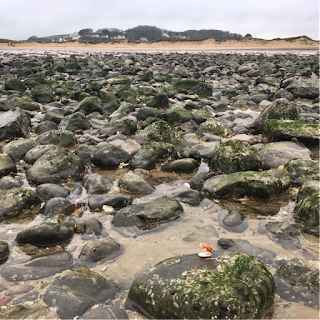 I went down to the edge of the world to watch the passing of this age.
The sun spills amber liquid on the wet cleg underfoot.

I feel the hug of the ground.
I hear the soothing shrieks of feathered sentinels overhead.

I see the end of days written on the rock teeth that still seek to consume,
Clutching at Caldey in the maw of the sea.

I see a time where the stars burn up and the clouds sigh into nothing,
For there is no more rain, and the pale blue atmosphere has boiled into the black.

I see how vast my now-beach is, and how tiny,
wrapped around with waves, and cliffs, and birds, and stones, and shells.

It contains the tiniest moment
And yet the whole big universe is here with me, also
Waiting on the beach for night to fall.

All together, we wait – witnessing. 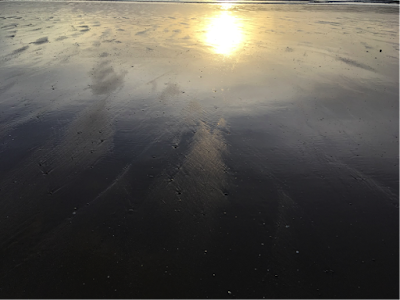 [As stated above, all the photos are Paula's unless otherwise indicated.]