Insight into a Hindu Temple

Given that India is a place of pilgrimage and a venue for many who wish to grow spiritually, it seems apt that our trip commenced with a tour of some sacred sites. Tamil Nadu is predominantly Hindu, although just over 20% of the populace are Moslem, 10% are Christian and there are thriving Jewish and Jain communities (the Indian flag was designed in part to reflect the populace with the:


whilst the blue wheel-like image is the Ashoka Chakra, the centre of dharma, the cosmic law that upholds the order of the universe – this image was drawn on the floor of the first temple which we visited. The wheel is also a symbol of motion – to remind Indians that forward progress is the key to success, as well as being a symbol of the Indian people’s diligence and industry). The flag was flown for the first time in July 1947. As with most things in India, there are strict rules as to how the flag may be used and where it can be flown. 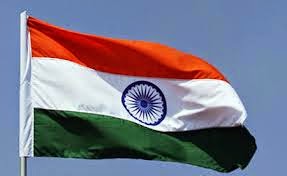 On our first morning we went to see the Hindu Temple of Ekambareswarar at Kanchipuram, it is dedicated to Lord Shiva in his elemental form of Earth. The temple was created around 600AD on the site where it is believed that, three and a half thousand years ago, Shiva and Parvati consecrated their marriage under a mango tree. Shiva was a tough boyfriend – he only succumbed to Parvati’s charms after she had undertaken a trialling penance for interfering with his plans – he poured fire upon her, requiring her to be saved by her brother, Vishnu, using the moon, and Shiva then diverted the Ganges in an attempt to distract her but Parvati convinced Ganga (the Ganges) that, as they were sisters, she should not be harmed) – Parvatii rekindled Shiva’s passion for her, partially by creating a Lingam (a pillar on an oval base which, although slightly phallic in appearance, symbolises the energy and lasting power and potential of the God), which demonstrated her love for him. 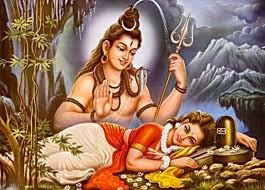 Understandably, the mango tree was important. The magic of the moon protected and entered it, as well as Parvati, and hence it gained longevity and the ability to produce 4 different species of mango. Although the original tree has now been replaced by its progeny, some bark from the 3,500 year old tree was on display, in a cabinet, as we entered, bedecked with lights like a Christmas tree.
Pilgrims who had travelled to be in this holy site touched the mango bark’s case reverently. Hindu temples are traditionally split into distinct units  - the pagoda-like entrance, the Gopuram, is the main gate, consisting of a high, ornately carved tower (the Vimana), covered in icons and dancing figures.

Leaving our shoes outside, we passed through the high temple walls (the Prakara) to enter the site. Looking up we could see the Dhvajastmbh, which is in effect an ornate multi-layered flag post that displays the insignia of the deity. Shiva’s symbol is a bull. Shiva in his bull-form was also on display in the Mukha Mantapa – an area in front of the Garbha Griha that was used as an area for devotional offerings and discussion. I’m not quite sure what the large silver tea-urn was for, but suspect that it was for donations.

The Garba Griha is the most important place in the temple. It is sited in the centre with a walkway around it, called the Pradakshinapatha, which provides an area for devotees to circle the holy place before approaching the sanctum. The Garba Griha is a cubicle-like enclosure with a roof, but no windows, and a single opening at the front. Access is usually restricted to the priest (Usually a Brahmin), but we were beckoned inside and I was told that I could take photos. We found ourselves in a small room formed of mirrors that reflected the image of Shiva an infinite number of times,


as well as a depiction of him with Parvati and their second son, their necks festooned with fragrant jasmine and other blossoms. 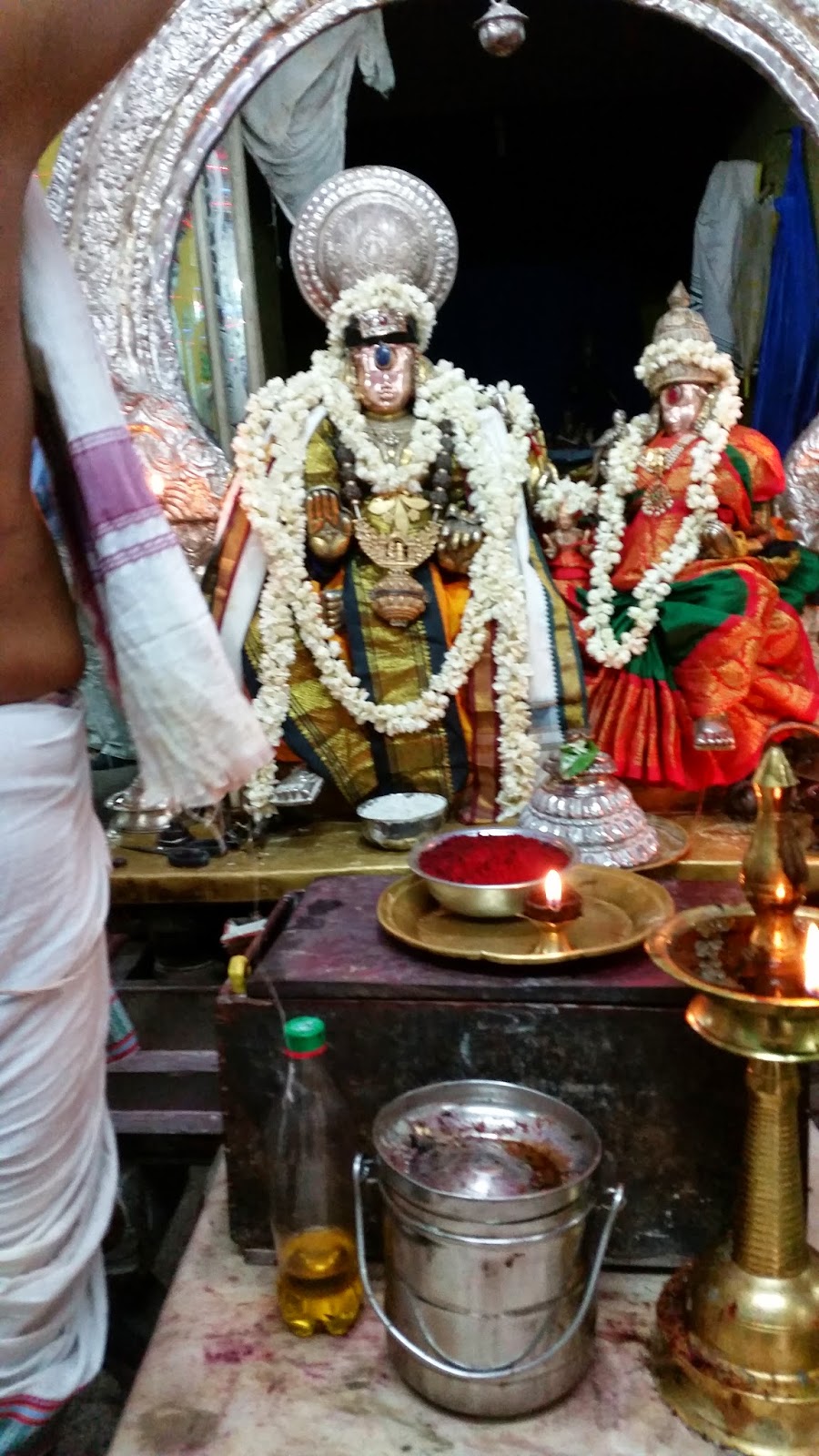 Despite demurring, we were blessed by the Brahmin who dotted our foreheads with white ash while verbally blessing us, using our forename (not dissimilar to a Christian baptism). 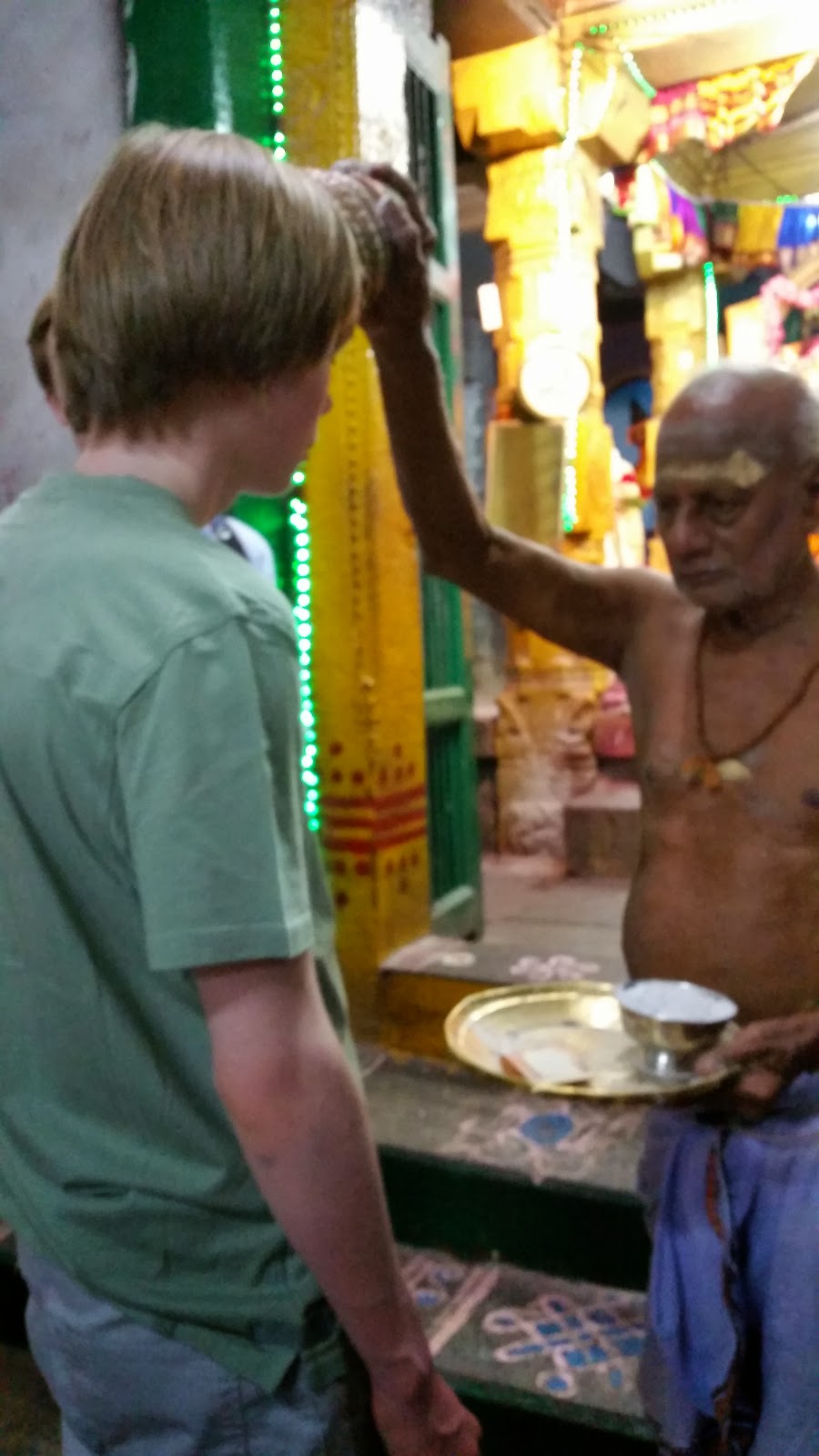 The ash is a Tilaka (religious marking, usually placed on the forehead) but is called Vibhuti and is specific to Shiva. It is a symbol of purity and the need to live a good life. Traditionally this ash was from the cremated bodies burnt that morning on the banks of the Ganges and hence it also acts as a memento mori – not unlike the paintings and objects depicting skulls that were popular across Europe during the Renaissance to ward off hubs and remind people of the brevity of life and certainty of death. Nowadays the ash is usually made from specific wood, pure Indian cow dung or rice husks burned as an offering in a sacred fire (Homa) until it becomes a pure white powder. This ash must not be allowed to drop to the ground – the wall outside the Garba Griha was covered in devotional markings drawn using ash. 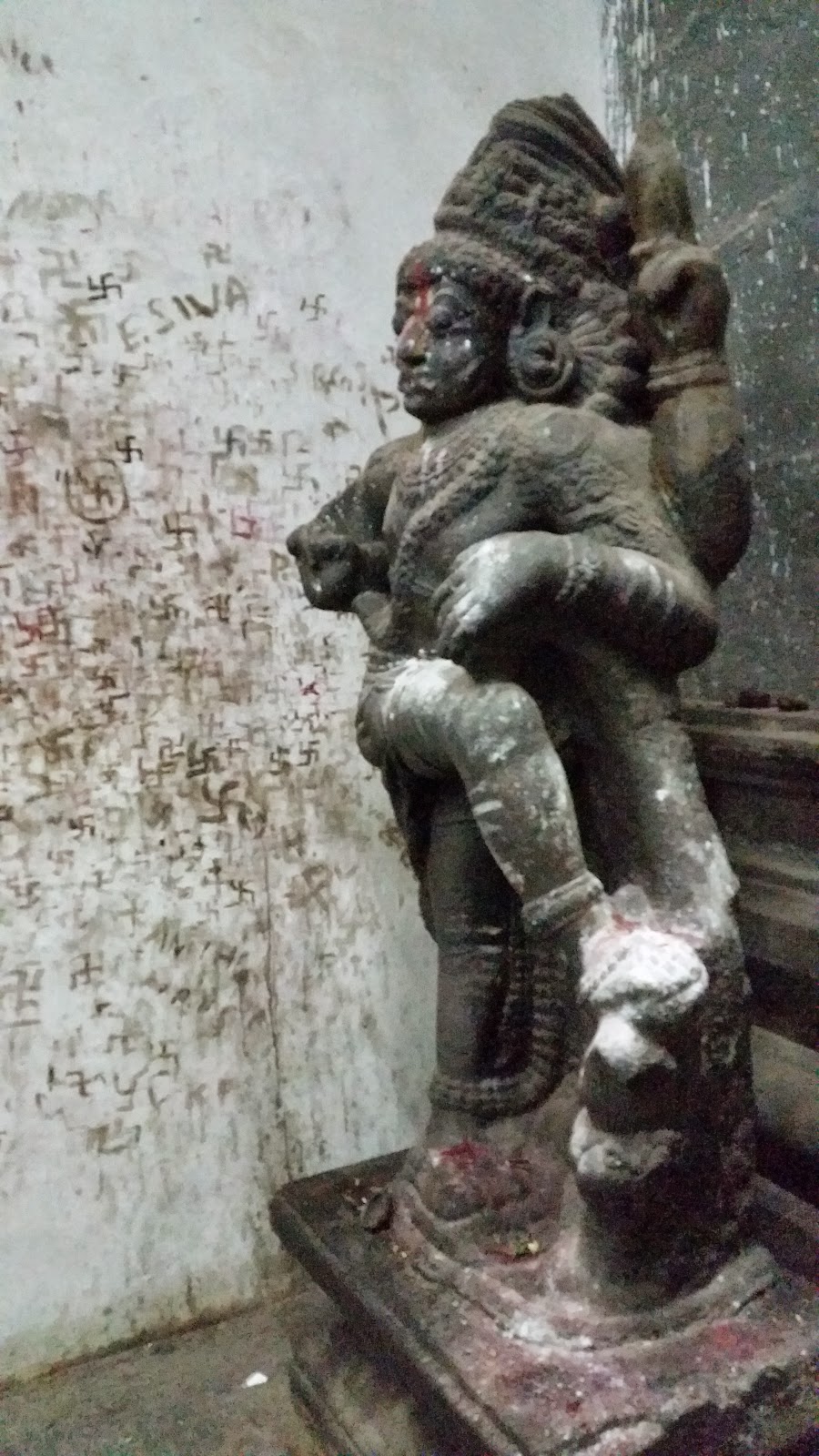 Having visited the main site we then went to see the site where the original mango tree had stood – a calm and peaceful shrine behind which a new tree grows in the stead of its forebear. 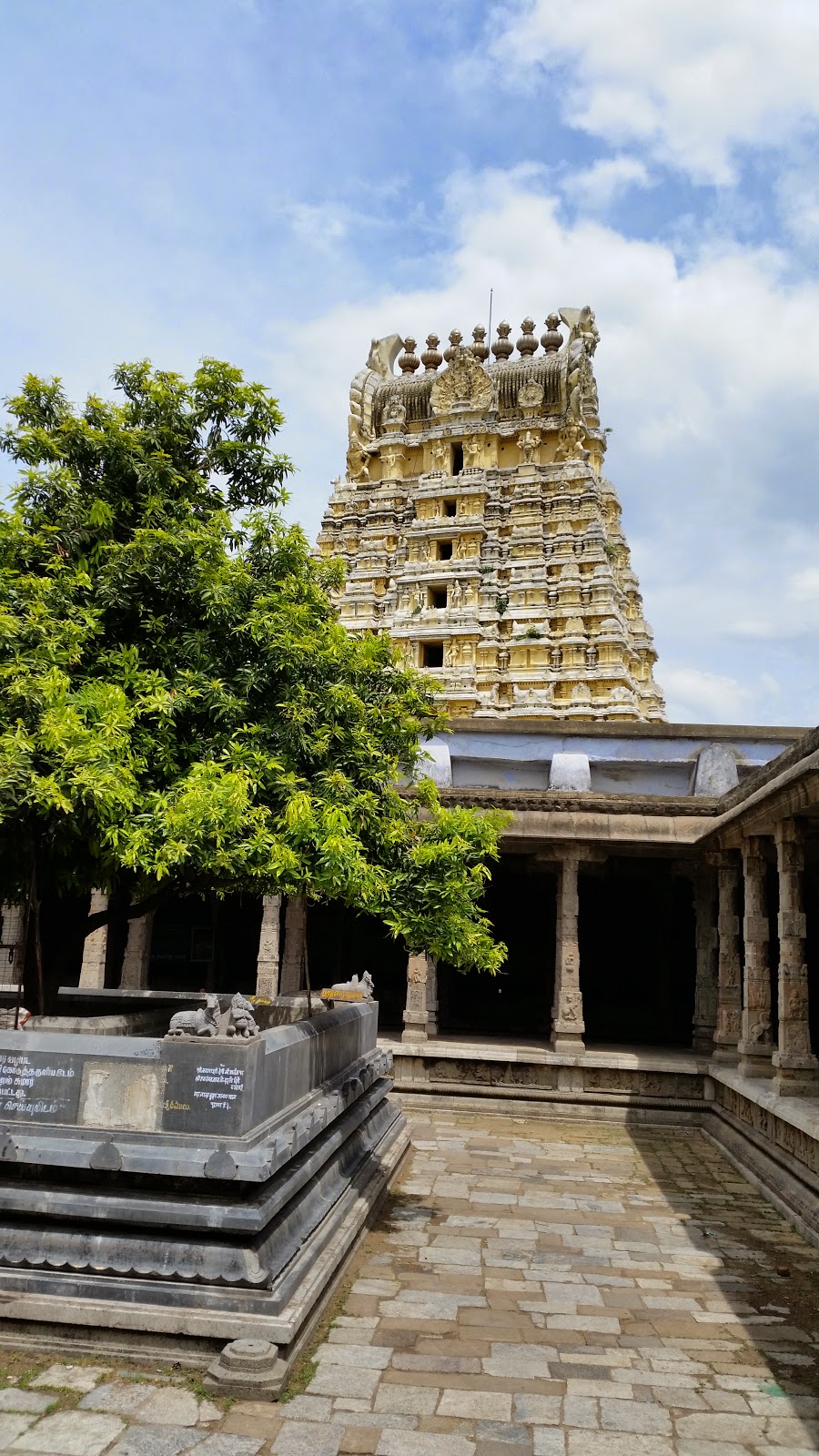 Again we were invited inside. 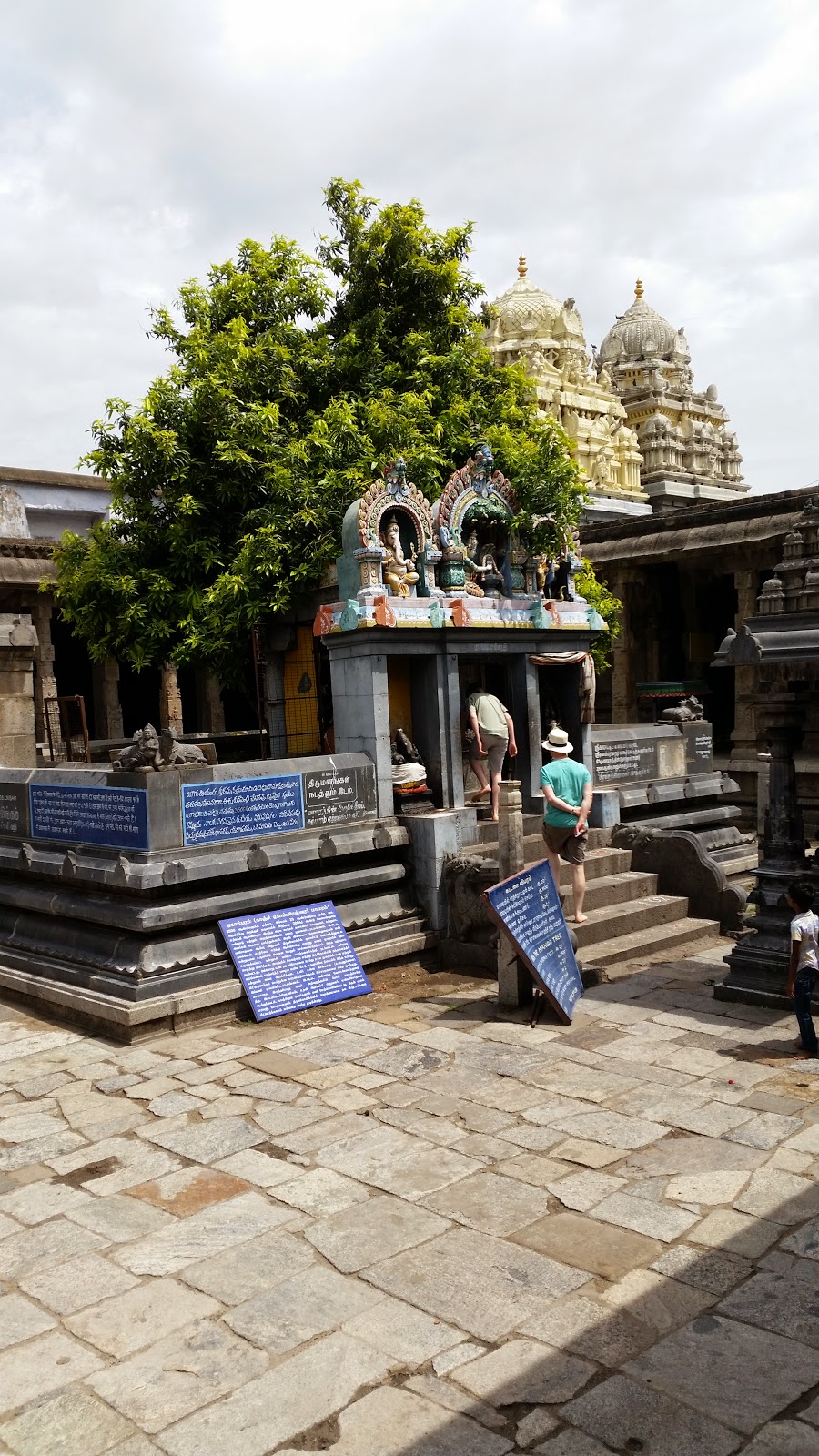 Another yogi, this time not the Brahim, offered to bless us. He used a red mixture to draw his Tilakas. 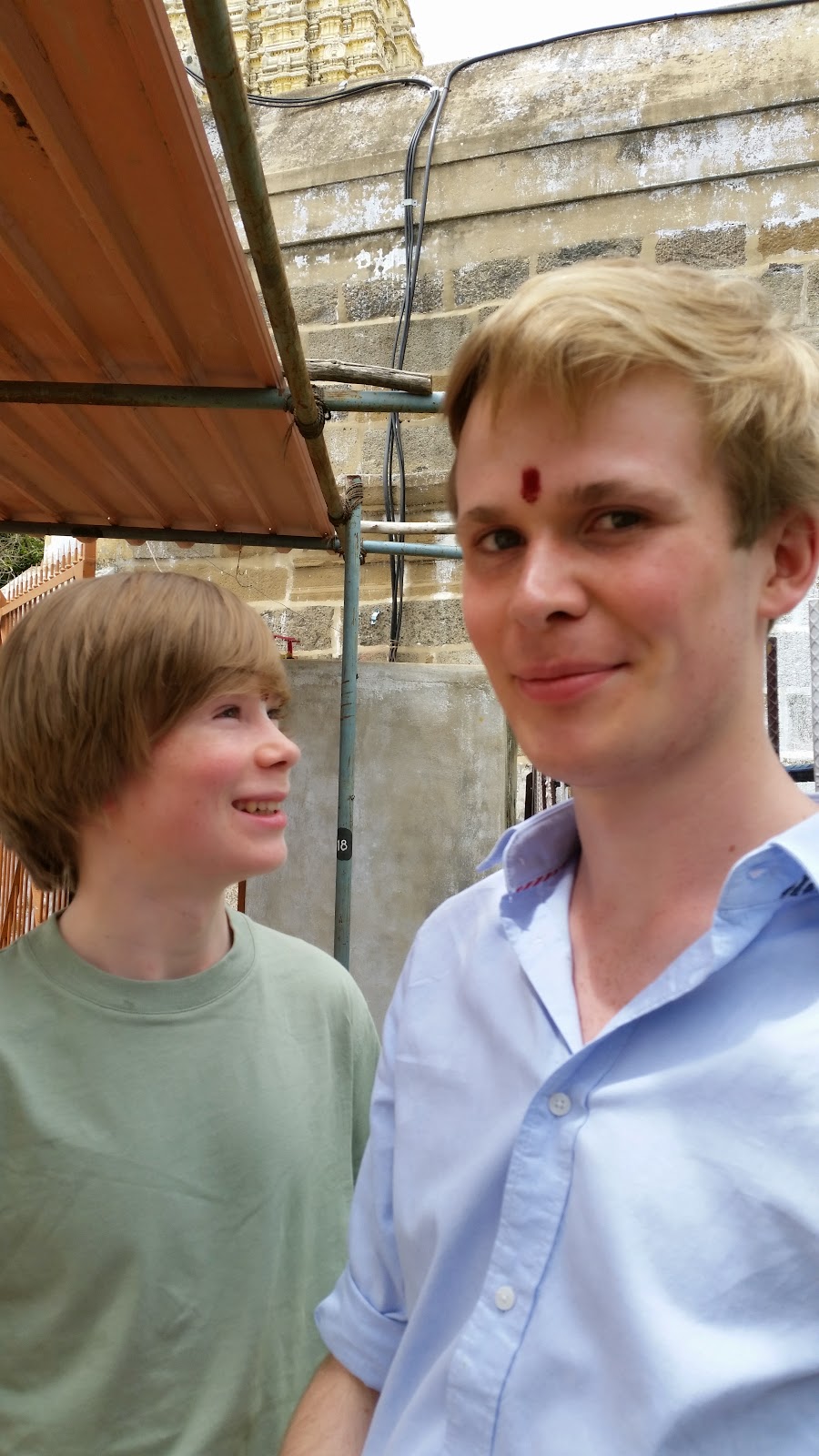 Many Westerners are familiar with the red “Bhindi” worn mainly by Hindu women. This red Tilaka is traditionally associated with Parvati, especially when worn with the ask Vibhuti. Tradition has it that red Tilakas came into existence at a time when people were fearful of dark magic and the risk of being mesmerised. Turmeric was known as an effective charm against harm but the powder was easily blown away. However, when the ground turmeric was mixed with lemon juice and the acid reacted with the turmeric, turning it red whilst also producing a paste that stuck. Red is an auspicious colour so deemed an effective protection as well as a symbol of religious devotion. 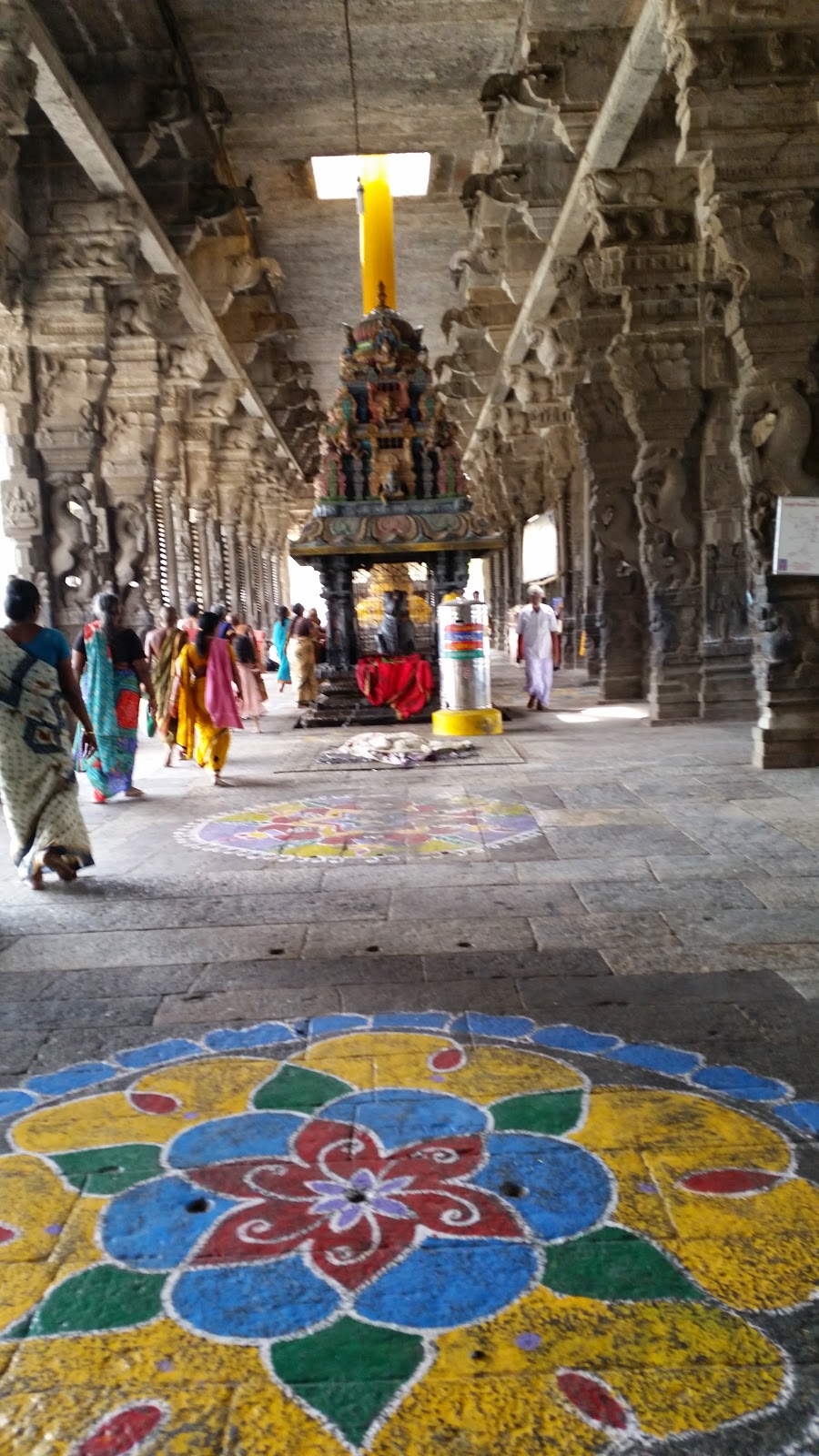 The building itself was interesting, constructed of cool local granite with the stones slotted into each other, so that the weight pressing down from above held the structure together. 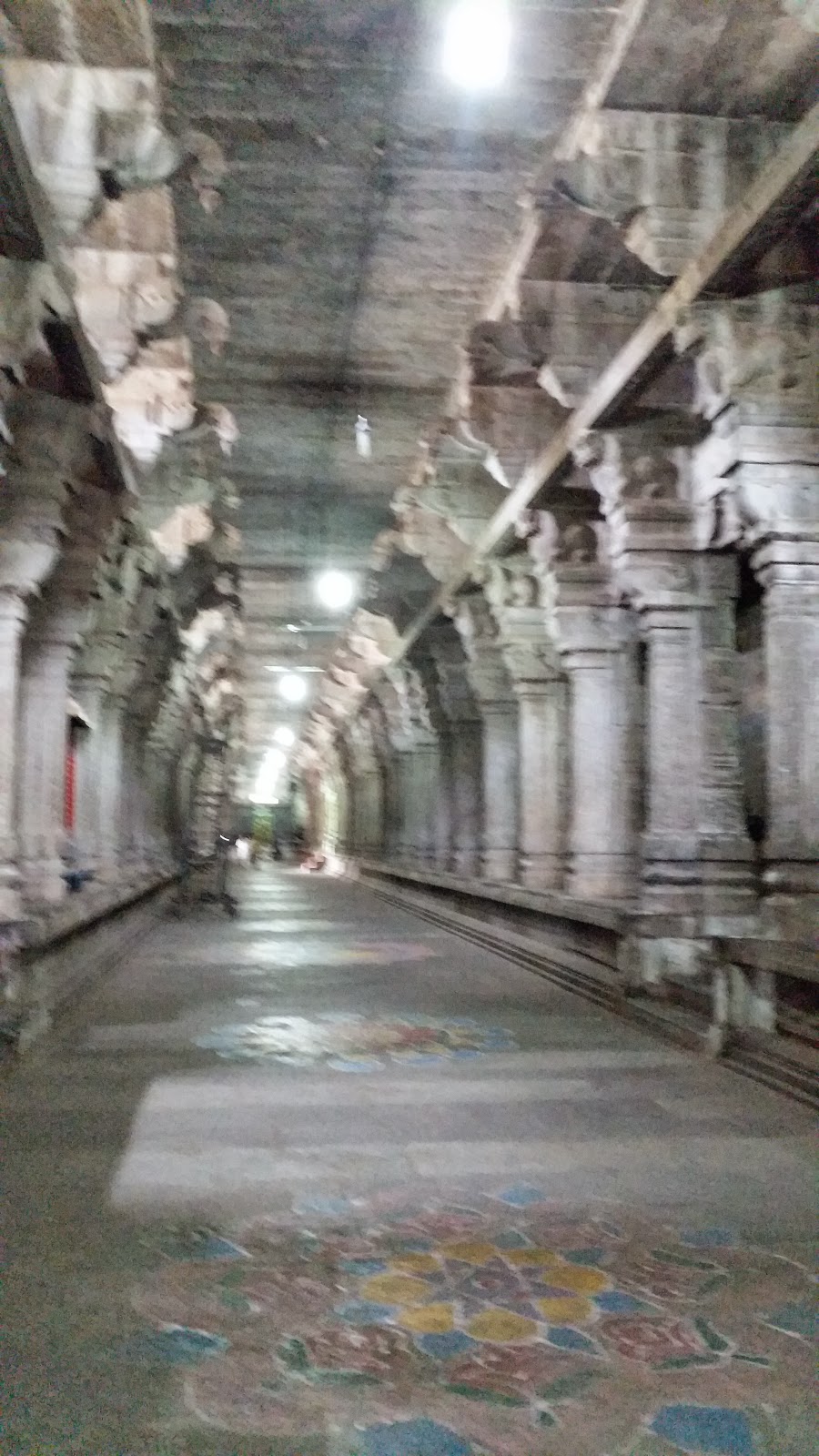 We wandered the passages leading to places of prayer – ceremonial carts and huge images of god and characters from Hindu stories, stored in alcoves until the next time they are needed for a festival, seemed to ogle us as we passed. 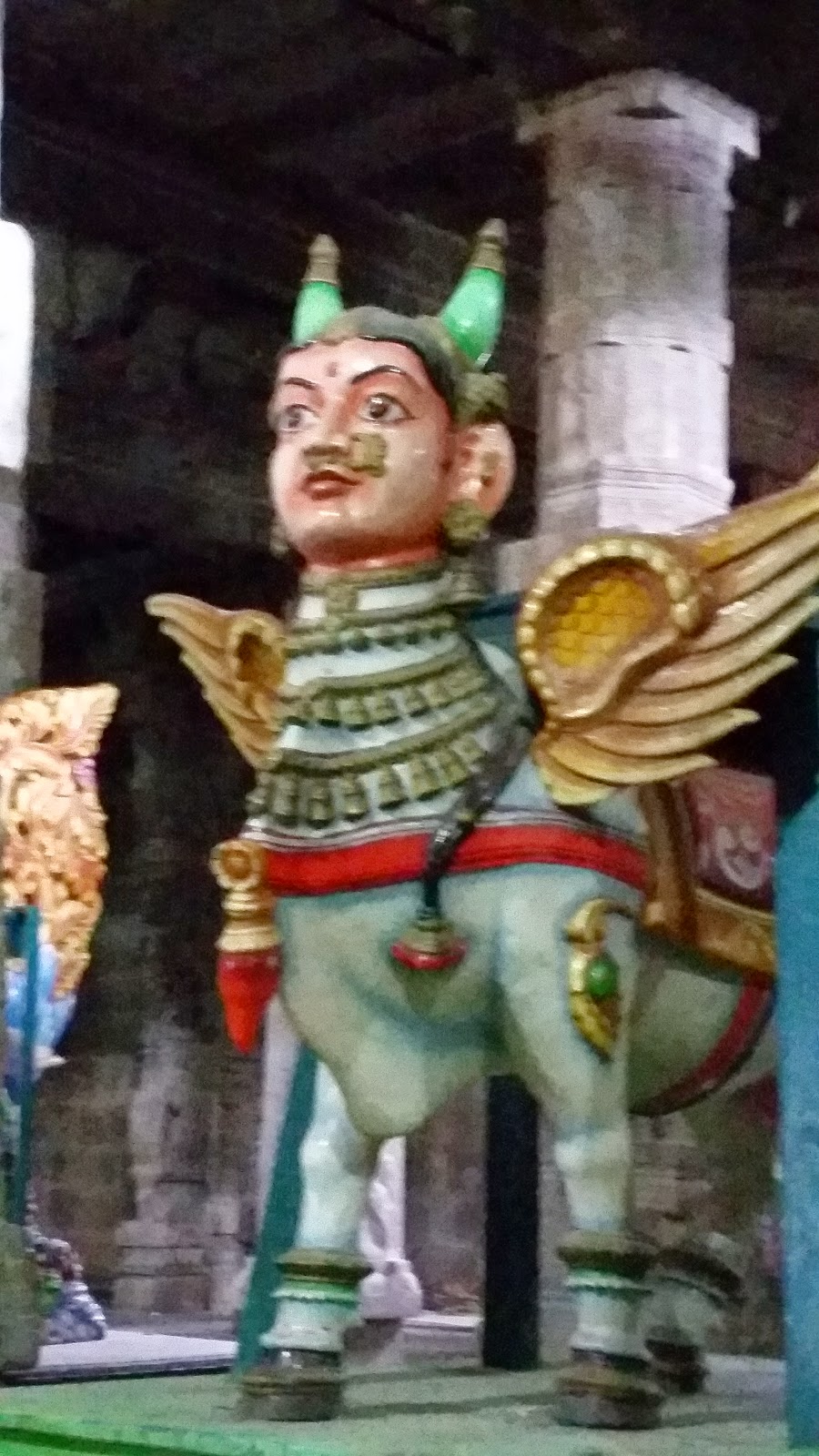 Around the outer edge were placed 108 carved granite Lingams, in memory of the Lingam Parvati had created and also to represent the 1008 Lingams sacred to Shiva and mentioned in Hindu texts. They were carved from local black granite –of which we were to see more on our next temple outing. It was cool inside – a welcome oasis from the humid heat. 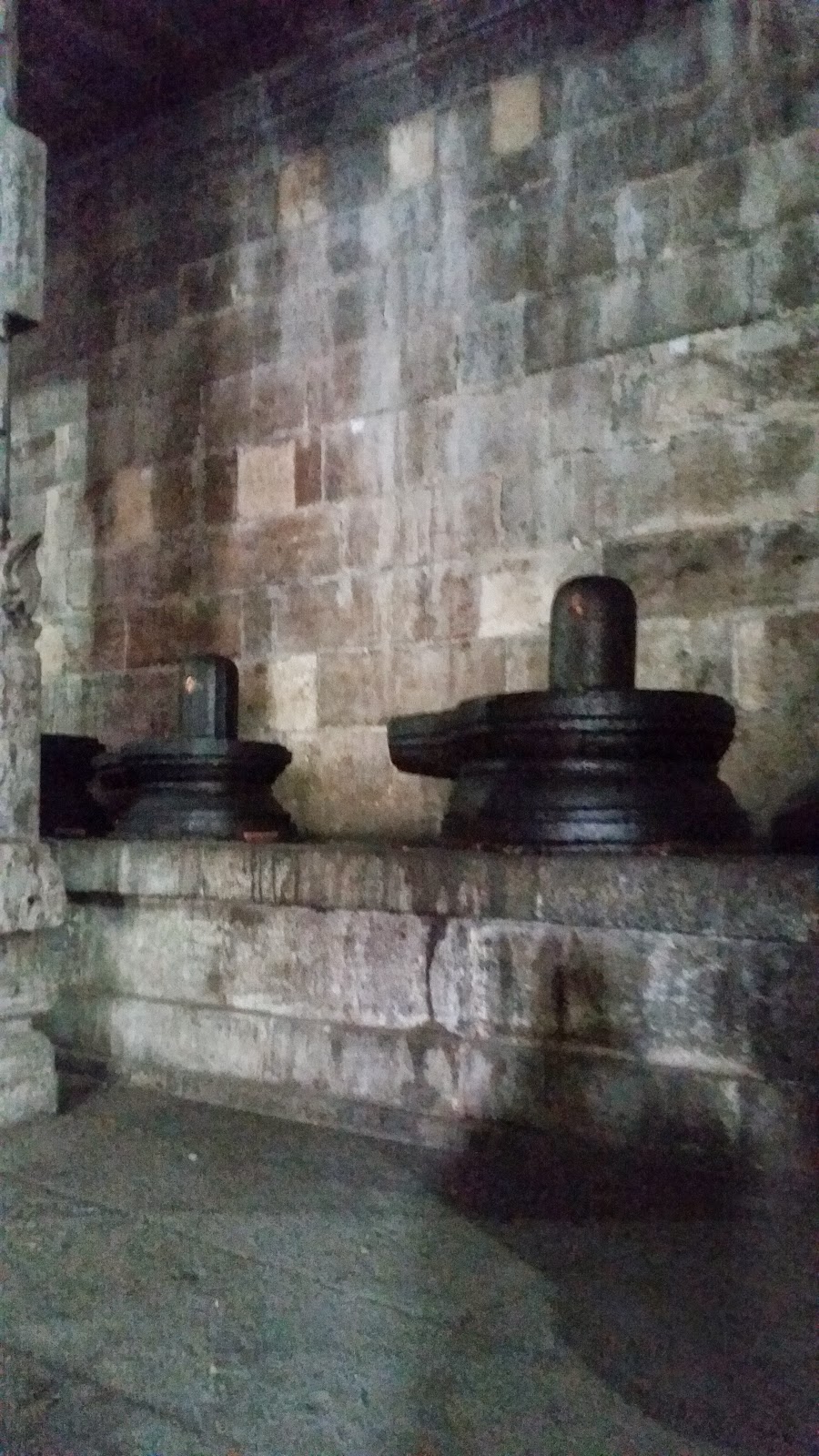 Our first temple visit has given me much to ponder. It was an honour to be so warmly welcomed into such a personal and sacred part of people’s lives. I have many Hindu friends and I think I now have a slightly better understanding of their religion and values. 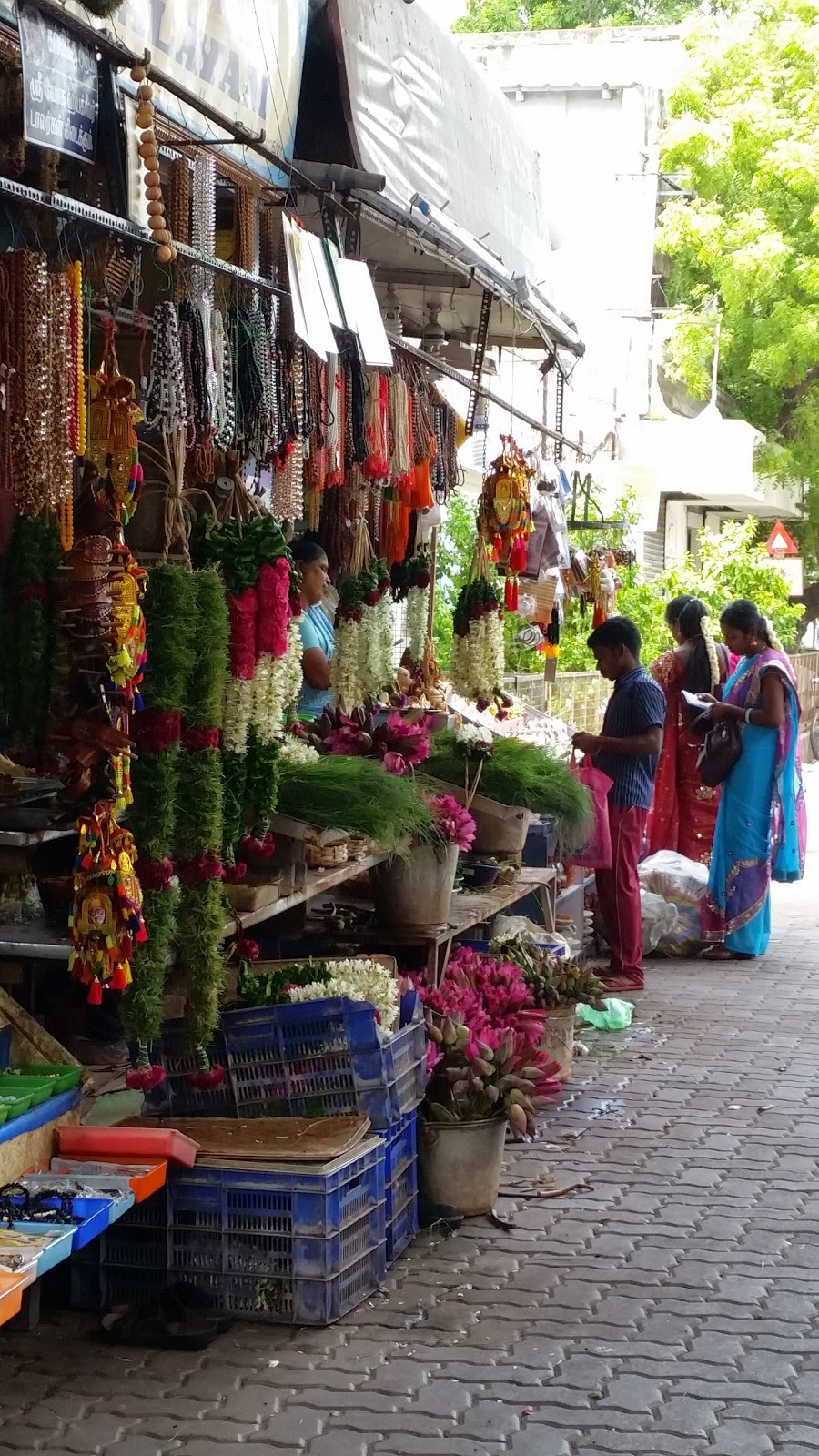 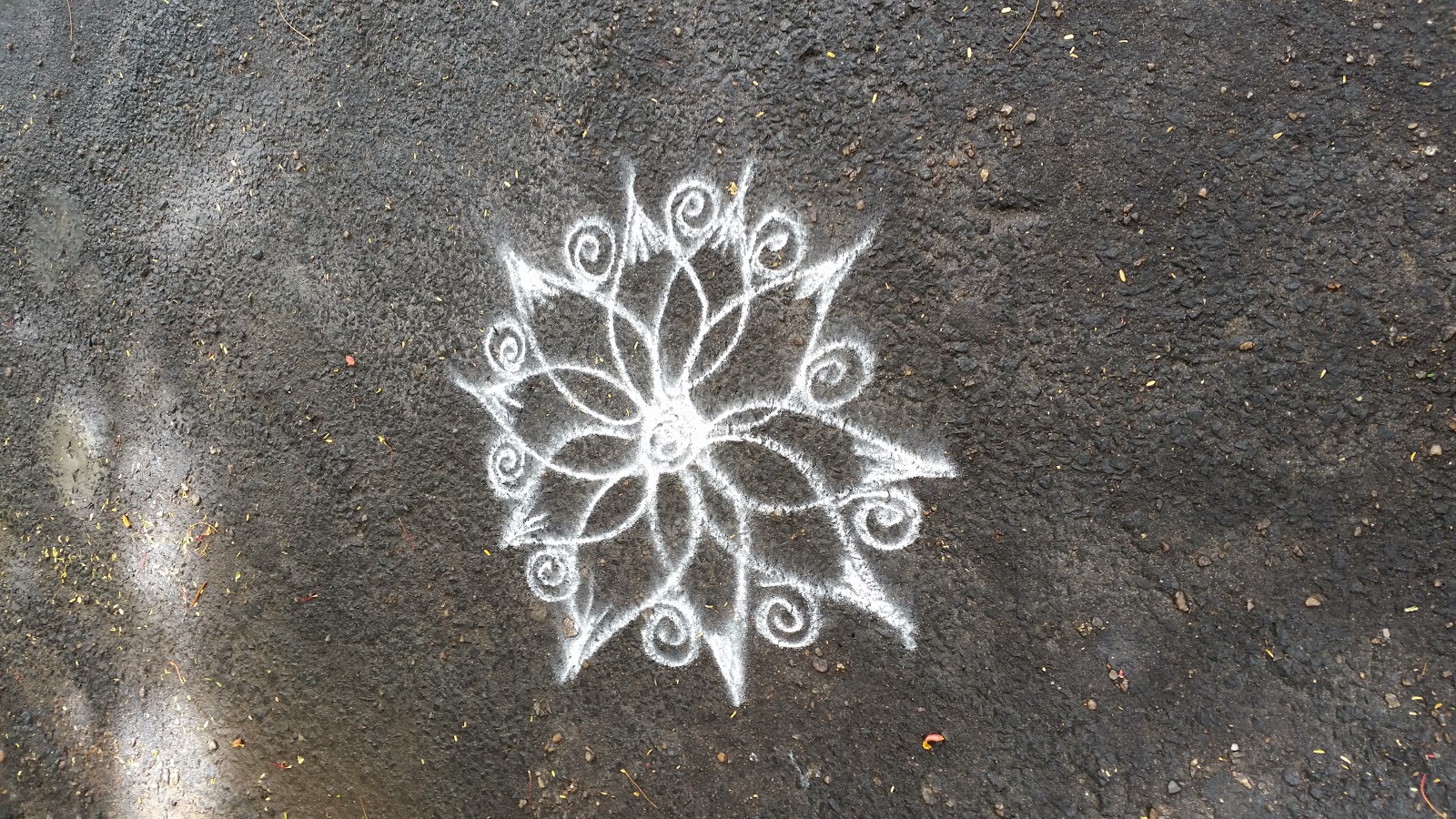