Living in the West, it is perhaps a little too easy for people to sniff in disgust at the poor in other countries and comment that: "Charity begins at home". However, I’d like to encourage you to reconsider. Yesterday I, along with the other people participating in Connecting HR Africa, went with some of the staff from Retrak to visit the street children who spend their days in the slums of Kampala, with the intention of offering them a better life off the streets and away from the slums and open sewers. The children are never forced - the choice is theirs and I am impressed at the respect that is consistently given to them.

We had both the local area bosses’ permission and an agreement from the police, but even with their support we were instructed to remove all jewellery and watches (even wrist bands and anti-mosquito bangles) prior to setting off, and not to take cameras or phones. Anything of value is temptation to a child who has nothing and, just as the Jack Dawkins (perhaps known better to you as the Artful Dodger) and Fagin (the adult who exploits the children and encourages them into stealing for him) in the musical Oliver!, when young Oliver Twist joins Fagin’s group of street thieves – “you’ve got to pick a pocket or two”.

The children in Kampala have no other option than to steal or to allow people to take advantage of them in exchange for food or money in order to survive, and the situation in Uganda’s capital is little different from the horrors that Charles Dickens campaigned against in his books over a century ago. Dickens' serialised novels held up to scrutiny the underbelly of Victorian society. Here in Kampala it is like stepping back in time – there is child labour, children as young as five are in servitude (often as a result of child trafficking); street gangs are run by unscrupulous adults;

...the wily old Jew had the boy in his toils. Having prepared his mind, by solitude and gloom, to prefer any society to the companionship of his own sad thoughts in such a dreary place, he was now slowly instilling into his soul the poison which he hoped would blacken it, and change its hue for ever." – Oliver Twist, Charles Dickens

and child prostitution is rife (we saw a girl of about 12, who was clearly seeking customers, dressed provocatively, and a man whom we suspect was a pimp). In 2016 we should have progressed beyond such things, no matter the country. What really struck me when spending time with the street children in the slum was the hardness and suspicion etched on their faces, despite their cheeky grins, hugs, fist bumps and high fives. On the streets nobody is your friend – if you are starving you will steal from anyone, and nobody will help - not even the young person the same age as you with whom you laughed and got high earlier in the day (Maslow got it right, as far as needs are concerned).

55% of children under 5 in Uganda live in poverty. 58% of the Ugandan population is aged under 18 and hence there are few adults to cope with a rising problem – existing social services have been overwhelmed, there is very poor communication between different public bodies – for example although the police are responsible for rounding up homeless children, they do not run the hostels where children should be kept and as a consequence vulnerable children frequently find themselves incarcerated in prison cells with dangerous adults despite having not done anything wrong – in these situations there are often disastrous consequences. HIV is rife and there is a superstitious belief in large parts of the community that if you sleep with a virgin you will be cured of AIDS. Rape is common – and sex is demanded as payment for food or things to make life feel less painful.

The girl's life had been squandered in the streets, and among the most noisome of the stews and dens of London, but there was something of the woman's original nature left in her still – Oliver Twist, Charles Dickens

Life expectancy for men and women is one of the lowest in the world, and this is unlikely to improve in the near future. AIDS has emerged as a significant cause of death and illness among young children; thus, the already high infant and child mortality rates can be expected to rise. Among children under five, who account for over half of hospital deaths, the main killers are malaria, pneumonia, diarrhoea, and malnutrition. Malaria has been found to be the principal killer among adults admitted to hospitals, while diarrhoea, pneumonia, and anaemia are almost as common as AIDS as reported primary causes of death.

Many of the children we saw in the slums were clearly ill, their noses were running and they suffered from sores and injuries, they were also on drugs – I was offered a couple of small packages of grubby greyish yellow crystals and a sniff of a bottle with a rag at the bottom (many of the children were clutching them). Most of the children in the slums sniff aviation fuel – they don’t do it simply for the gratification of getting high (although the respite from the grind of their daily existence must be welcome); 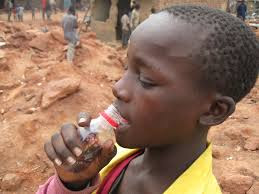 … one of the side effects of the sniffing aviation fuel is that it prevents the inhaler from noticing the cold when sleeping rough - although it is hot during the day, it can be chilly at night. In addition, sniffing helps suppress the appetite, which is an advantage when food is hard to come by or over expensive (whatever the manner if payment).  Despite providing short-term relief, the long-term harm of sniffing is dire.

This blog is reading like a catalogue of issues but I do want you to understand what it is like, what the donations you have provided will be spent on and the hope for the future. If you haven't given anything, it's not too late and everyone here would be thrilled were you to make a donation to my Just Giving page – every penny contributes directly to the charity and the people it helps.

I have to confess that, after coming to Uganda and seeing things myself, I am genuinely stunned and impressed by the work that Retrak do. They enable children to come off the streets and start having a childhood. They cope with the drug dependency and mental and physical health issues that the street children suffer from and then help re-establish a sense of self-worth and an appreciation of others and opportunities for the future. It must be so hard trying to reintegrate a child with a family when there were valid reasons as to why he or she ran away in the first place.. I am in awe of the skills and patience of the staff – it takes time and effort to establish trust and make a difference to a maltreated and badly damaged child.

In addition to a shortage of space, Retrak suffers from not being able to respond to the enormity of the problem in Kampala – there are 10,000 children on the streets, but the Retrak establishment that supports children fresh out of the slums/streets only has 25 beds available, so they have to turn children away. 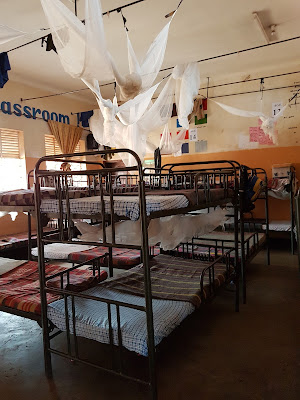 It was depressing driving through the streets around the bus station last night and seeing how many children there were sleeping in shop doorways. 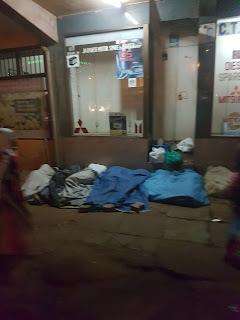 They believe that they are safer there than in many other locations.

“There were some ragged children in another corner; and in a small recess, opposite the door, there lay upon the ground, something covered with an old blanket.” - Oliver Twist, Charles Dickens

Many Ugandan street children club together and pay one of the guards in residence in the shop doorways to watch over them while they sleep. They lie in front of him on sheets of cardboard, with a rough sack or blanket pulled around them. Other children who cannot afford to pay for the service try to lie close to their more affluent peers and hence the area becomes packed every night with traumatised children trying to secure some rest. The boys and girls who end up with Retrak have some terrible stories - not just as to why they ran away or had to leave home but also the experiences they have had to endure while on the road or once in Uganda's capital.


"I have sat by myself and cried to think of his wandering about in the dark nights with nobody to help him." – Oliver Twist, Charles Dickens


It is interesting how much you can tell about a person from their eyes and expression. Look at the below photograph of Victorian street urchins in the UK. I saw similar faces on boys and girls in the slums. 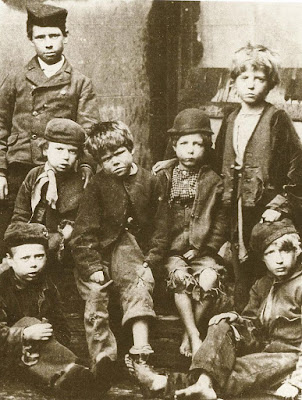 The children in the slums only smiled with their mouths – their eyes and facial expressions were hard and wary. 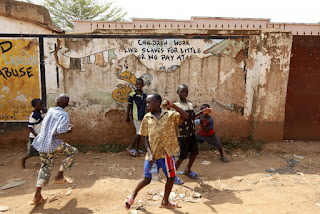 When we headed back from the slums, Pied Piper-like, nearly 100 boys followed us and 80 of these made it to inside the site. After a sleep under the veranda porch, and a medical inspection including a test for AIDS (as a result of which 2 children were taken to hospital that afternoon), they had lunch (which we dished up) 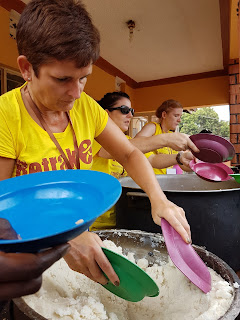 and then went out onto the fields with Alice and some of the other Connecting HR sportsmen to play football. Gradually, as the afternoon progressed, these boys started behaving more like children, as opposed to suspicious and manipulative mini adults with light fingers. They noticeably began to relax and enjoy themselves. Not all of the boys we had fed decided to stay - for some, the freedom outside the compound and the lure of drugs was too strong - they were allowed to leave whenever they wished. The Retrak sites are not gaols and their aim is not to ensnare children into long-term residential care with the charity. 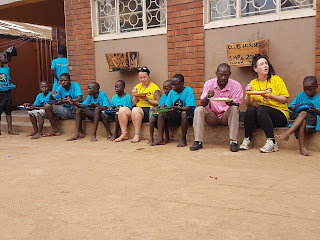 Retrak’s raison d'être is to help get street children off the streets and, ideally, for them to settle back with their families. Individual support and counselling is provided to each and every child, as well as legal liaison with both the police and the courts and facilitation with parents (if they can be traced) and/or foster parents or relatives. On average the process from a child leaving the streets to their being comfortable with returning home to their parents takes 4 months. In addition, there is an embryonic outreach programme being launched, to help families and communities who need it - with the aim of prevention by addressing root causes for why children flee. - such as parental anger inspired by poverty and desperation. 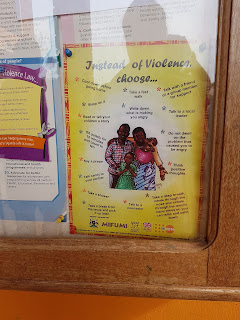 You could say that, because Retrak’s goal is to help a child become successfully reunited with its family, its journey ends at home. So,  returning to where this post began, but using a different lens, it is true that: “Charity begins at home’ - where the dismissive Western scoffers have said it should be. And my final observation has to be - What the Dickens are we doing allowing street children to be so prevalent, alone and abused? It is impossible not to be moved when here with them. Clearly Charles Dickens himself understood and felt the same.

We should strive to ensure that Dickensian conditions are wiped out across the globe. Together we can make a difference. 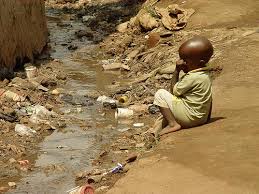