One of the biggest dangers to business is an inability to adapt as the world changes. We are all familiar with once respected household names that have vanished, due to their failure to respond to a new environment: Blockbuster; Pan Am; Kodak; Wedgewood; Our Price; Woolworths; and Encyclopaedia Britannica to name but a few.

Writers better and more knowledgeable than I have explained their demise – for example by highlighting Blockbuster’s refusal to acquire Netflix and Our Price’s and Kodak’s failure to appreciate the appeal and ease of digital access for consumers – it is notable that only 61 companies from the original 1955 Fortune 500 List remain today. You need to be alert to what is going on in the world and be proactive and innovative to ensure survival, especially now that the speed of change seems to be becoming ever faster. If you don't spot cracks in the foundation disaster will follow. 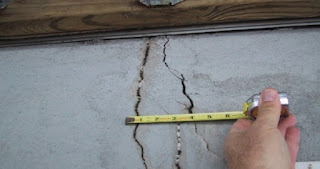 The impact of technological advancement on business really struck me when I was on holiday last week in Mexico. We had gone to Central America to explore the ancient Mayan sites and hence, whilst in Mexico, we spent some time in Mérida – an attractive town, with a colonial heart, built on the site of an ancient Mayan settlement close to some of the best locations and temples.
Mérida, which has been the cultural capital of Yucatán since the arrival of the Spanish Conquistadors, was, until the end of the First World War, the centre of the world’s rope trade.
Our driver told us that by 1900 Yucatan was providing 85% of the twine for the huge North American wheat harvest (this commercial arrangement had been orchestrated by a giant, domineering U.S. corporation, International Harvest – in a not dissimilar approach to that of the United Fruit Company in Guatemala. When Cyrus McCormick invented a grain harvester to reap the U.S. grain crop, it was designed as a machine that could tie the bundles of corn stalks into sheaves – to do this it required a strong smooth twine and Yucatán was able to oblige);

almost all the rope for the world’s navies and merchant ships;

and the majority of burlap bags for the transportation and storage of crops. Wealthy landowners ran plantations (or “haciendas” – the Spanish word for estates). These were based on slavery – not dissimilar to the plantations of the American South. The owner (the hacendado) lived in grand house in significant comfort;

smaller homes were also provided for significant employees such as foremen; the labourers slept in workers’ dormitories and during the daylight some toiled in the fields, whilst others were involved in processing plant fibres or in the factory where the ropes were made. Each hacienda had a chapel and most had a jail.

The advent of The First World War resulted in a huge surge in demand, as the military of all sides required cables, cord and twine - 95% of the rope used in the Great War came from the town of Mérida and its surrounding area.

Local landowners became even richer due to what locals referred to as “green gold”. The Haciendas that were built were opulent and grand. Then suddenly the boom ceased, a change happened and the hacendados did not see it coming. Nowadays once glorious haciendas sit crumbling and deserted. They are atmospheric and attractive but also a tangible warning to any business of the need to remain alert to the activities and inventions occurring around the world.

Sisal, as it is commonly called, is a plant that the Mexicans refer to as henequen – it gets the name sisal from the small port of that name, from which it was once shipped to buyers around the world.

I am familiar with sisal as a floor covering – we have it on the stairs outside our kitchen. Prior to processing, the plant looks like aloe vera crossed with a pineapple and it produces long and strong natural plant fibres; hence it was and still is ideal for making rope.

Mayan tribes had used the fibres for centuries to make sandals, mats and twine. From the 1800’s Spanish masters forced them to work on their estates, built on land that had belonged to the Maya, and, when demand outstripped labour supply, Chinese were imported (due to their supposed ability in pineapple cultivation – the two plants look very similar)

and then the remaining Chichimec nomads, the Yaquis, brought in from the Madre Occidental area of Chihuahua in northwest Mexico - a convenient subjugation to prevent future revolts in Chihuahua – over half of the Yaquis population were deported to work in slavery on the henequen haciendas in the early 1900’s. It is a disturbing and shameful history.
A downside of natural fibre rope is that it is prone to dry rot and needs to be twisted into thick cables to be strong – which makes it cumbersome.

Wallace Carothers was born in Iowa in the late 1890’s. He was a student, majoring in Maths and Science, at the start of World War I and, as a result, due to the shortage of teachers, he found himself promoted to become the Head of the Chemistry Faculty at Missouri.

He enjoyed research and so moved to Harvard and then, to become a pure researcher and escape having to teach, he accepted a job with Du Pont. In 1935 he ran a small lab. He discovered that a combination of chemicals, when mixed with water, produced fibres. Initially it appeared that although the first threads produced were strong the subsequent strands were too weak to be useful. However, once he realised that the issue was caused by excess water leaching back into the mixture (and hence diluting the concoction), it was a simple matter of redesigning the equipment and then a viable new synthetic fibre was created – nylon.

Although initially intended for the fashion industry (specifically stockings) it was soon used accepted for industrial and military purposes, especially for the forces in the Second World War. Caruthers never witnessed the success of his discovery as he committed suicide in 1937. Nylon is very strong, quite light, stretches well and has a high shock-absorption capacity – it is also immune to dry rot. It was not long before nylon was the preferred substance to sisal for the creation of rope, resulting in the demise of the Haciendas of Yucatán.

As we wandered through deserted haciendas, ate a good lunch at Hacienda Ochil (a converted plantation, 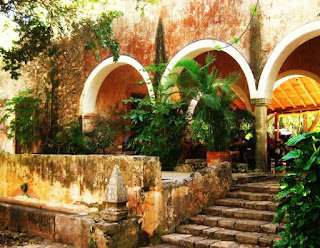 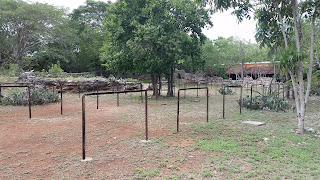 remains of the rail transportation system 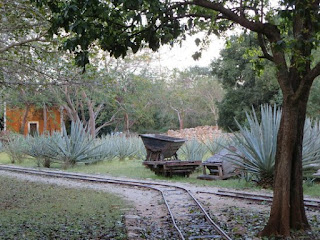 and steam chimney that once powered the factory, 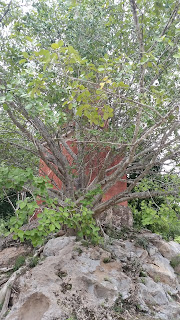 with a small museum, 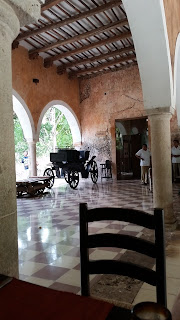 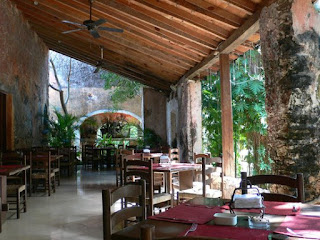 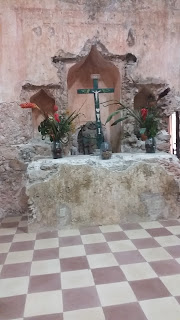 amphitheatre built over a cénote (sinkhole)


and interesting examples of local artisan work, including sisal bowls and taco boxes) and admired the Chinese cemetery in Mérida (there is still a thriving Chinese community within the town), 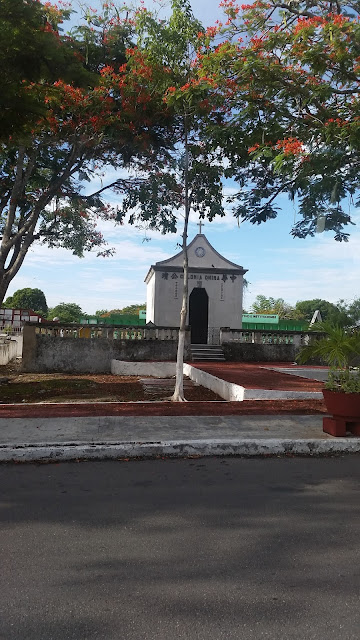 it was impossible not to think of the speed with which the world can change. Man has made rope for over 17,000 years – the earliest fossilized fragments date from that time (which makes it an older invention than the axe (circa 6,000 BC) or the wheel (circa 5000BC).  It is probable that rope in some form existed much earlier than even the first homo sapiens. Some modern apes show elementary skills at creating tools and the rudimentary use of ropes and early humanoid tools show wear marks and twisting that could indicate the use of rope (for example for fixing in place a spear point made of flint or for tying things together). For the past 75 years ropes made of synthetic fibres and metal have been in vogue – they are easier to make using automated machines and are not restricted by the need for the yarn to be spun in one long line (necessitating the use of rope walks).


However, I wonder if opinions will change.

Traditionally rope has been used for the hangman’s noose and I wonder if we are unwittingly destroying our environment and thereby metaphorically hanging ourselves with a rope of our own making. Increasingly we hear of the harm that man-made substances are having on our environment – sea birds dying after consuming or becoming entangled in plastic,

a turtle maimed by a drinking straw 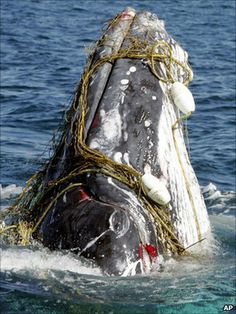 petitions by environmentalists seeking a change in our behaviour and even a whale supposedly asking for help in the removal of plastic from its mouth.  Some things need to change, but, as I commented at the start of this piece, change is a constant in our existence. We must build upon what has gone before to ensure a better future. This has been said before and so I will leave you with Friedrich Nietzsche’s observations from Thus Spoke Zarathustra:

“All beings so far have created something beyond themselves; and do you want to be the ebb of this great flood and even go back to the beasts rather than overcome man? What is the ape to man? A laughing stock or a painful embarrassment. And man shall be just that for the overman: a laughing stock or a painful embarrassment…(…)
Man is a rope, tied between beast and overman – a rope over an abyss…What is great in man is that he is a bridge and not an end: what can be loved in man is that he is an overture and a going under…”