Change is one of the constants in human existence. Often developments and innovation bring advantages and ease (witness the washing machine and how it has transformed housework,

or the creation of the battery and our resultant dependence on it within our increasingly mobile world).

However, for many the arrival of new approaches, often imposed upon them without consultation or choice, is uncomfortable and difficult.  Guatemala, and in particular the religions and beliefs of its people, is an interesting case study in coping with change.

From the earliest days of the Conquistadors, Guatemalan people have developed ways of combining their traditional beliefs with religions and attitudes introduced by others.

When the Spaniards arrived, along with suppression, disease and destruction, they brought Roman Catholicism. It was perhaps reassuring to the Mayans to see the worship focused on a cross (admittedly one with a longer arm pointing to the south.) The Mayans have a symbolic cross, linked to their creation story and understanding of the universe.

They believe that, after a few false attempts (using animals, wet clay and wood), the first men were moulded out of maize flour mixed with blood. The Mayan mythology maintains that the Mayan people themselves were made out of all colours of corn – white for their bones, yellow for the flesh, black for their hair and eyes and red for blood.

There are four colours of maize (or sweetcorn/corn as we refer to it in the UK) – red, black, white and yellow - these correspond to the colours of people. White is for the people of the north, yellow is for the communities of the south, black represents the inhabitants to the west and the Mayans themselves believe that they are red and that their direction is the east, with its close link to the sun.

The Mayan cross, in use long before the arrival of Christianity, illustrates these directional differences (as well as a green centre for growth and development) and it is considered to be a depiction of the tree of life drawn from Mayan cosmology. Mayan astronomers and shamen believed that the centre of the world was the centre of the universe (and for many Lake Atitlan is the world’s centre, where creation began, with mountains rising up from the primordial waters to create the lake – interesting to note that the lake is in fact the giant crater of a volcano erupted 85 million years ago that has filled with water of the millennia, before being surrounded by volcanoes itself).

Looking at the star-studded sky at night, especially in parts of Yucatán where there is little light pollution, you can see the Milky Way with ease – there is a large dark area near its centre. Drawing lines to the north, south, east and west, you create a cosmic cross with the earth at its heart and a link to significant objects in the night sky. The Mayan knowledge of astronomy and mathematics was lost on the Spanish invaders, but the power of worship for both communities was intense.

The Spanish catholic missionaries and representatives of the Church were careful to place their churches and cathedrals on traditional religious sites, where Mayans had worshiped for centuries. In return, when ordered to build churches, especially on established Mayan sacred sites, the Mayans would secretly include some of their own customs and practice, such as a flight of 18 steps leading up to the main church in Santiago Atitlán (18 is the number of months in a year according to the traditional Mayan religious calendar), followed by a second flight of 20 steps (that represent the number of days in each month).

In many locations Mayan practices have been allowed to continue or to blend with the in-coming Roman Catholic approach, to enable an acceptable co-existence. St John the Baptist is (for obvious reasons) associated with water – even now it is hard to tell when a Mayan prays in front of an alter to St. John the Baptist whether the prayers are to him or actually to the traditional god of water, the rain god Chac. Mayan prayers often involve offerings, such as rum to purify, or flower petals to sweeten the message.

In addition to physical offerings, Mayans almost always use candles, which are equally common in Roman Catholic churches and an essential act to accompany prayers, especially for the souls of the dead. There are many such areas of overlap, or “synchronicity” as the locals call it. Although Roman Catholic candles are traditionally white, Mayan candles are symbolic and more vibrant than their Catholic counterparts – various colours are used to represent different requests (green candles, linked to the planet Mercury, are supposed to bring good business deals, influence over a loved one, hope, employment opportunities and lottery wins – they are also believed to overcome bad influences; black candles are associated with Jupiter and are used to incapacitate enemies and prevent unwelcome gossip but they need to be used with care as they can backfire on the user; red is the colour of the East and is used for energy, love and the reduction of sadness and bad energies;

white candles are linked to purification and aid memory and calm anxiety as well as being used to protect children; yellow, the colour of the south is energy-giving and encourages good health; pale blue is often used to support students, as it is linked with mental capacity, but is also good for travellers and those in need of money; dark blue is the colour of fortune; and purple candles have traditionally been used to dispel bad thoughts and defeat illness). The Roman Catholic churches that we have visited in Guatemala have all allowed the use of multi-coloured candles as part of local prayer.
Recently the Mayans have become more overt – when the Roman Catholic church in Santiago Atitlan was destroyed in the severe earthquake of 1960, fragments were stored and the then parish priest, an American named Father Rother (more of him in another post), commissioned local artisans to build a new altar and screen. 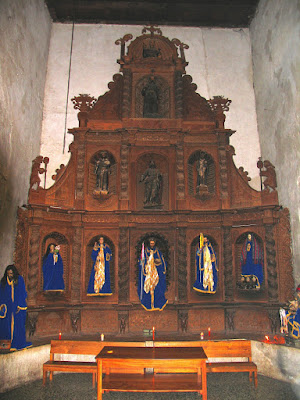 Certain carvings have been added to the decorations, ones that one would not normally expect to see in a Roman Catholic cathedral. With a high degree of freedom the wood carvers and craftsmen (two brothers - Diego Chavez Petzey and his younger brother Nicholás Chavez Sojuel) included significant Mayan imagery: like a Christian triptych there are three parts to the altars at Santiago Atitlan – to the Mayans the triple altars within the church represent the three volcanoes that overlook the lake and the main altar is clearly shaped like a mountain. On the main screen, to the the right hand side there is an image of St John the Baptist walking up the exterior, 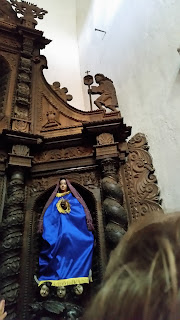 but on the left there is a Mayan Sharman replicating his pose. 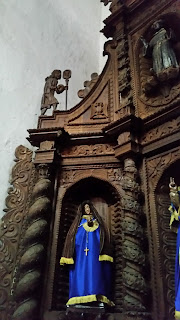 There are local caves used for worship up in the hills surrounding lake Atitlán, particularly the hill that is thought to resemble the head of a sleeping Mayan, 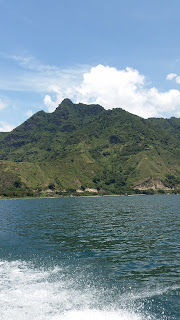 and it is probable that the image of the shamen reminds Mayan worshipers of trips into the hills to pay respects to ancestors, elders and ancient gods. An interesting piece written by Allen J. Christenson describes the Chavez brothers’ influences and inspiration and provides explanations for some of the carvings. Traditional Mayan images abound – the Quetzal (the symbol of Guatemala, the name for the local currency and a sacred but living bird) is shown on the pulpit, 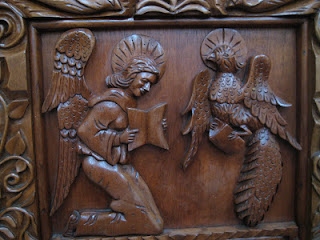 either giving or receiving the Holy Word. Perhaps most surprising of all is the inclusion of Maximón (pronounced Ma-shi-mon in the local dialect), a local folk saint, amongst the saints and biblical figures carved on the altar, he can clearly be seen in a panel which also depicts a traditional deer dance. 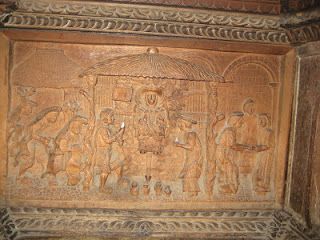 Maximón is an interesting character – in many ways he is the badass boy of sainthood. Stories vary as to his identity – by turns he is considered Satan, a saint (referred to as San Simon), Judas, or a relic of pre-colonial Mayan religion. An elderly man standing near the shrine we visited simply stated that he is a friend of the saints. We were fortunate in that we were taken to meet him in person. He sits between two guards in a smoke-filled, candlelit room that reeks of rum and Quetzalteca , the local hooch.  Dressed in slightly antiquated Western attire, wearing a stetson and a surprising number of ties, he looks a little as though he might be suffering from toothache - a handkerchief is tied round his face and under his chin. He sits silently, observing while he chomps on a cigar. 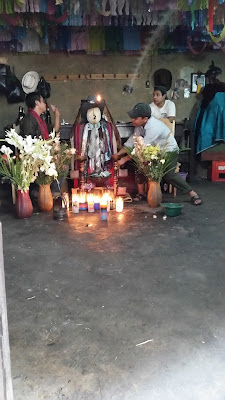 He is a carved effigy and the simple wooden mask is reputed to conceal his actual face (we were told that it is carved of fine jade, but that Gringos are not allowed to see it, due to the first mask having been stolen by the Spanish and the replacement purloined by a priest in 1950’s, who donated the jade mask to a French museum – it was only returned in the late 1970’s). Maximón’s current visible mask is said to be the fourth carved since the original theft – it is made from Tsaj’tol tree wood (the wood which gave from to the wooden beings of the second creation in Mayan legend).

Maximón is viewed as a badly behaved but socially-concerned grandfather for the people; providing protection and granting wishes and at times playing tricks. He resides with a local clan for a year before relocating in Holy Week – the new host home being elected by the group of 12 brotherhoods or “cofradias” (which are family-based clans in distinct neighbourhoods, established by the Spanish to aid town governance). Due to the complexity of Maximón’s reputation – a mixture of benevolence with occasional mischievousness and even malevolence, people are loathe to relinquish worshiping him, just in case he takes the desertion personally and decides to be vindictive. It’s better to be safe than sorry. 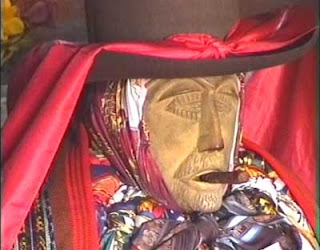 Roman Catholicism, combined with traditional Mayan beliefs has been the dominant religion in Guatemala until the late 21st century. However, evangelical churches started coming, to provide aid and to establish missions, after the 1978 earthquake. Currently 40% of the rural population have converted to evangelical churches. We flew in from Dallas with a group of 23 from a US church who were going to Guatemala for a week to build houses for the rural communities.

In exchange for converting and agreeing to donate 10% of their annual income (a traditional tithe) a native Mayan can receive a new house and potentially a better standard of living. Superficially this seems a good deal, but how does it work when the majority of the rural communities and many of the urban-based indigenous people still follow the old beliefs?

The answer is “synchronicity” – in effect hedging your bets by entwining beliefs or practicing obeisance to both (but perhaps being more open about one than the other, so as not to risk losing your new home). Corruption is rife in Guatemala (from the top downwards: the past vice president’s secretary was exposed for corrupt conduct by the UN and the deputy standing with the preferred candidate, Baldizón, in September’s elections has just been accused of money laundering, thereby potentially knocking them both out of the running). Hence people do not expect the government to make their lives easier – it is more probable that prayers will bring prosperity.

In this complex, often immoral and demanding environment apparent duplicity is simple and an effective way of coping with change – utilising a subtle combination of the old with the new. Some activity is perhaps just deception for personal gain, but this is ingrained in the national psyche – after all, Maximón himself was/is tricky to deal with and encourages tricksters. 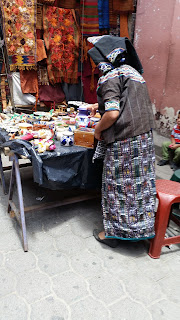