I have spent the past week in South Africa on business.  It is a beautiful, complex and inspiring country and I appreciate how fortunate I am to enjoy some time here, gaining a better understanding of the environment and working with its people.  On Saturday, on the advice of a friend, I went to explore the charming town of Franschhoek in the Cape Wine region.  On arrival it reminded me slightly of Arrowtown, the gold mining town established in 1862 in the Central Otago region of South Island, New Zealand.  Both locations have amazing mountain backdrops; produce exceptional wines; are located near good golf courses; can boast charming, well-preserved, rural architecture, predominantly dating back to the mid-nineteenth century - you might be interested to know that Franschhoek was only formally declared a town in 1881, having formerly been a nameless “dorp” (small town on the Platteland) for over two centuries.  Both towns’ successes are founded on the arrival of productive and passionate settlers (in particular the Huguenots in South Africa - but that is a topic for another day).  The towns’ buildings are adorned with Victorian-style artefacts, such as verandahs and sash windows, and to this day they have retained an old world charm, with tree lined avenues and space, that make them feel like the European towns that many settlers had left behind. In each location, these attractive stone buildings were only erected after initial pioneers had established themselves, living frugally, with little other than basic tools and their bare hands to forge a place within a wild and inhospitable environment.


Each town is beautiful and appealing, but there are darker sides to their development that are also important factors in making them into what they have now become.  Each has a history of slavery, exclusion and exploitation (the Chinese miners at Arrowtown were invited to come and seek gold, but only once the majority of European originated miners had given up and moved on, due to the diminishing levels of gold).  The Chinese, seen as alien foreigners, were ostracised by the wider community, so that they were forced to reside in miserable accommodation and conditions, far away from the main town.


In Franschhoek slaves were imported from countries such as Malaysia, other regions of Africa and India, soon after the land was colonised.  These slaves undertook hard labour on the land to create productive homesteads and grow produce for trade and supporting the Dutch East India Company ships and other vessels rounding The Cape.  The deliberate introduction of slaves was a clear alternative to utilising the local indigenous people - the San and the Khoikhoi bushmen in South Africa, whom the setters considered primitive.   The indigenous people had little desire to work for or with the Europeans - their culture was fundamentally different, being bushmen they did not appreciate the concept of homesteads and the ownership of land; they were by choice nomadic hunter-gatherers and herdsmen.  Indeed, it was not until the after the two tribes had merged to become the Khoisans, and their populace was decimated by Smallpox (brought over from Europe in 1713 by setters and against which the bushmen had no immunity) - resulting in their numbers being reduced from over 200,000 to a mere 15,000 - that they were compelled into living and working with the colonialists in order to survive.   They became farm hands as the main activities around Franschhoek were the production of orchard and soft fruit such as apricots and grapes.  The Khoisan have left little by way of a tangible legacy of their own culture, other than intriguing rock art and cave paintings - some of which show the influence of the colonial settlers at the time that the traditional bushmen lifestyle in the Cape region was in decline.

In New Zealand, the Maori also were nomadic people and regularly used to pass through Arrowtown on route to hunting the giant Moa birds (not unlike the African Ostrich) and seeking greenstone, which they treasured for making beautiful and functional tools. (Neither the Maoris nor the African bushmen developed smithing and smelting skills to make their own metal artefacts, prior to the arrival of Europeans).  The Maoris were not in favour of the settlers’ arrival and possession of land - as with the tribes in South Africa, they did not share the same outlook and ways of living.  And, like the Khoikhoi and San aboriginals, the Maori were talented and exuberant artists, leaving rock art and various artefacts, as a memory and record of their time in the land.  Neither indigenous peoples survived contact with the new arrivals without significant change to their own cultures and way of living.  Much was lost as well as gained by the contact.  One thing that was lost forever was their unique and perhaps simpler outlook on the world based on they own experiences.  Contact with different cultures and approaches inevitably results in change.  As Lady Bracknell comments in Oscar Wilde’s play The Importance of Being Ernest:

“Ignorance is like a delicate exotic fruit; touch it and the bloom is gone.”

The parallels between the two towns and their people continue to amaze me: more recently, both locations saw a decline in populations until the 1950s, when they both independently reinvented themselves as genteel holiday destinations.  It is hardly surprising that, on wandering through Franschhoek at the weekend, I was very struck by the similarities to Arrowtown.  They may be far apart but the men who created the towns shared smiler cultural roots and outlooks. 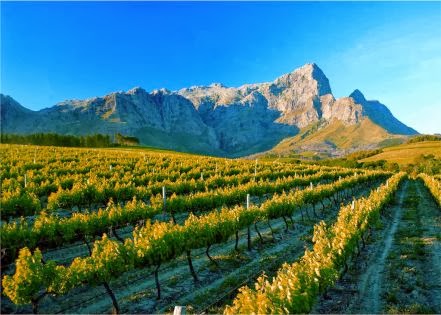 During my visit, as well as admiring the stunning views, I tried to get a better feel for the local culture (as perhaps you can tell from the above comments).  I paid a brief visit to the Huguenot Memorial Museum in Franschhoek  - a treasure house of personal property, family history and people’s stories.  I was inspired by what I saw and it made me think about the world of work in which we now operate and how we treat people. I could talk further on slavery and toil - timely and apt perhaps, given the recent Oscar success for “Twelve Years a Slave” (winning Best Film and Best Actor) .  However, despite my concern for ensuring fairness and equality within the workplace, it was a very simple exhibit, lying amongst a collection of fairly nondescript agriculture objects, that has remained embedded in my thoughts.  It was a collection of beautifully shaped, very simple, wooden balls, used in the past for making indentations in straw or other suitable packing material, to ensure safe passage for soft fruit when being transported to market or overseas.  When I first saw them I thought that they were a child’s croquet set, but then, on closer inspection, I realised that none of the balls was exactly the same size as any of the others.  The correct sized ball would be selected each time, by comparison to the piece of fruit, to ensure a perfect, snug fit.  Attention to detail and was required when using the balls. This was not an environment where a “one size will fit all approach” was deemed appropriate, despite the effort required to create a space of optimum dimensions and security for a peach, apple or apricot.  And no “placing of square pegs in round holes”, so to speak - each piece of fruit was provided with its own, bespoke hollow, appropriate and unique to it.

Throughout the growth of industrialised and large-scale commercial businesses, organisations have sought to commoditise and standardise approaches - to benefit from efficiency and speed.  However, I wonder if a time for a change in this approach is now upon us.  With the advent of technology, it is easier to be more bespoke both for customers and employees, without incurring significant costs and inconvenience.  Environmental planning and workplace considerations can now be quite individual, as indeed can learning and development.  In training, a “sheep dip” approach, despite having a purpose (such as ensuring required compliance or regulatory awareness), will seldom produce the best outcomes.  One of the reasons why I am a supporter of coaching within the workplace is that people are individuals and optimum outcomes require individual focus and understanding.  The time has come to stand back and consider what we are trying to achieve in the workplace, rather than simply tweaking an existing approach or offering.

So we need to think not just about the business objectives, but also about the people we are relying upon to achieve results - do we know what is important to them?  If you don’t understand what drives and motives the people you are supposed to be leading, you cannot expect to be able to get them to follow you.  Getting it wrong, disregarding them as individuals and treating them only as part of a process rather than a person (with feelings, frustrations and aspirations) can demotivate and demoralise.  All too easily a disgruntled employee, like a bruised piece of fruit, can turn foul, possibly contaminating others around them.  Little sophistication was required to make the wooden balls a valuable tool, only an eye for detail and an appreciation of size and individuality. The farmers around Franschhoek have, through hard work and the help of others, created a beautiful and productive environment.  Centuries ago slavery was deemed appropriate to achieve desired results.  Nowadays, to get things done you cannot rely on a whip and harsh treatment.  People are delicate.  You need to inspire them, make them comfortable so that they can share your vision and support them so that they will support you, hard results can and should be achieved through a soft touch.