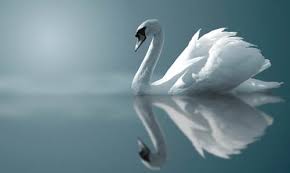 As my mother and I watched the swans, waiting to be fed from the balcony of the hotel opposite, on our last night in Brugge (Bruges), it was hard not to smile, they provided a perfect finale to a memorable few days away.  Swans are important to the people of Brugge.  In 1488 Maximilian of Austria, head of the Duchy of Burgundy to whom the City owed fealty, demanded an increase in taxes.  Incensed, the burghers rioted, capturing and executing Maximilian’s representative, Pieter Lanchais.  The surname “Lanchais” is a traditional local Brugean name, meaning “long neck”.  Maximilian, safely secured in House Craenenburgh on the market square, witnessed the torture and execution of his faithful bailiff.  Legend has it that, shortly after Pieter Lanchais’ death, a flock of swans landed at the scenic Minnewater, the canalised lake the feeds the waterways that cross the City.  (Minnewater translates as the “Lake of Love” and it is a beautiful and romantic spot - resembling the inspiration for a scene from a Disney cartoon. My mother, son and I enjoyed watching a huge terrapin swimming in the warm waters by the lock on Friday afternoon).  Horrified at the brutality, Maximilian decreed that the citizens of Brugge should atone for their misdemeanours by being obliged for eternity to keep swans on the lakes and canals of their City. The swans that are there look like small Mute swans (mutant Mutes?), but, unlike the ones we have in England, they are not silent (they hiss and honk softly when calling for their supper) and they don’t migrate – they are clearly content in the town. 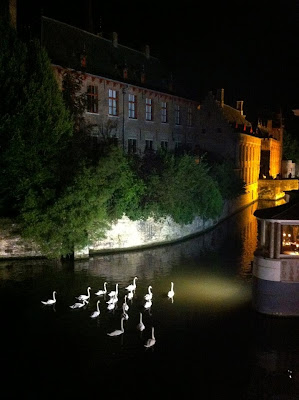 In honour of their swans and the exceptional local produce, the people of Brugge held a chocolate making competition in 2006 to choose the best local praline (Brugge is recognised as the centre for hand-made chocolates in Belgium).  The winning chocolate, which has a secret recipe only known to members of the Brugge Chocolate Guild (the people entitled to make it), is in the shape of a swan.  My mother insisted on locating the best chocolate shop in Brugge, in order to buy gifts to take back to members of the family.  I have many good friends who are recognised as leading artisan chocolatiers, most of them make fantastic chocolates out of fresh often seasonal ingredients (including surprising combinations such as olives, fennel, tobacco and marmite).  Brugge is famous for its pralines and the best place we found was Dumon – a small family run establishment whose initial shop is tucked behind the Markt, Brugge’s main square http://www.chocolatierdumon.be/shop/brugge-bruges-eiermarkt . Unlike the famous Belgian chocolate names (such as Godiva and Leonardis), which are mass produced in factories, Stefan Dumon makes his chocolates by hand and the care and attention to detail really shows. The balance of flavours, textures and soft, smooth chocolate are a testament to hours of dedication and craftsmanship. 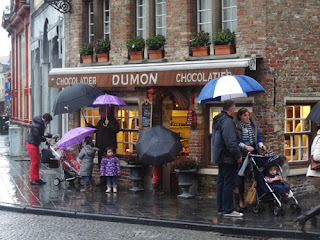 Research shows that people put in more effort when they work by themselves or as a member of a small team, rather than as part of a large group where it is easy to blend into the crowd.  This effect was first assessed, in 1913, by a French agricultural engineer, Maximilien Ringelmann, who developed the theory whilst conducting an experiment involving subjects pulling a rope (either by themselves or as part of a group), whilst Ringelmann measured the force they exerted.  His research showed that in larger groups individual effort declines – when the subjects believed that others were pulling with them, on average they pulled 18% less strenuously.  Ringelmann tried to explain this as being in part due to groups being inefficient at coordinating their efforts.  However, more recent studies have shown that an individual’s perception of the effort being made by their companions has an impact on their own contribution.  The harder people believe others are working, the less effort they are likely to make themselves.  This is sometimes referred to as “social loafing”.  Subsequent research, by Kurua & Williams in 1993, has also shown that even when group members believe that they are contributing at their maximum effort level social loafing can occur – it is built into us.  The key to overcoming it seems to be rooted in motivation – if a person genuinely believes that their contribution is exceptional and can be distinguished from those around them then they are less likely to “swan around” and not pull their weight so to speak.

Most people think that the English phrase “swanning around”, meaning to act in a carefree, irresponsible and unencumbered manner (not to be confused with the American “peacocking” meaning to show off), originates from the observation that swans appear to glide in an apparently effortlessly way across the water when they swim.  However, I was surprised to find that the idiom has military roots http://www.worldwidewords.org/qa/qa-swa6.htm – being first used in 1942, in an article in the Daily Telegraph, to describe tanks (German Panzers) appearing to meander aimlessly on the battlefield when seeking out the British Eighth Army in North Africa.  One can only presume that the journalist found the guns protruding from the turrets to be neck-like and, due to their length, reminiscent of swans.

Here are a few images that might make you think twice:


It is easy to let our imaginations play tricks on us.  Most of us are aware, when recruiting, of the tendency people have to favour candidates who appear to share similar traits to ourselves – “we went to the same school”, “we wear the same clothes”, “we speak with a similar accent” so, “given that I’m OK, they must be great too”.  It’s an easy trap to fall into.  In addition, people tend to have inflated opinions of their own capability and worth to others.  The Chartered Institute of Personnel and Development (CIPD) undertook some research into this last year and found that 80% of managers within corporates believed that their staff were satisfied or very satisfied with them as a manager, whereas just 58% of the employees reporting to them said that this was so http://www.cipd.co.uk/pressoffice/press-releases/reality-gap-capability-UK-8million-managers-030512.aspx .  Similar research has occurred in America since 1946, repeatedly showing a mismatch between how managers view their performance and how they are perceived by people in their teams. http://www.examiner.com/article/what-employees-want-vs-what-managers-think-they-want .

To avoid gaps in understanding and opinion, we need to make an effort to become more self-aware, as well as becoming increasingly alert to our surroundings and the people with us.  In my experience it is often the person whom we believe to be a misfit, whom we think won’t amount to much who, in the right circumstances, turns out to be a star.  Churchill is a good example of this.  However, don’t despair, even the supposed experts can get it wrong.  Here are some examples of school reports for a few famous people who perhaps turned out not quite as their teachers predicted:
So, in conclusion, remain alert for the “ugly duckling”, who might be a fledgling swan...

and help them to be motivated and focus on what is important.  It is amazing what can be produced if an individual really wants to achieve something... 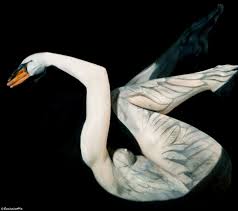