When Potential Comes to Fruition

It was Apple Day on Saturday and, as part of the celebrations, I found myself standing in an idyllic English orchard sipping freshly pressed juice.   A lot of planning had gone into the day – a seated brass ensemble (including a sousaphone) played cheering music, the drink literally flowed,
food was spread on tables under the fruit-laden trees, piles of apple varieties decorated the yard, the speeches were entertaining and informative, a painting of England’s oldest cider maker (Frank Nash, who has been making cider for 87 years) was unveiled, libations were poured on apple tree roots in the hope of a good year to come, toasts, tastings and laughter abounded.
The glorious reds, greens and gold of the apples, the rousing music, the sights, smells and sounds reminded me of a Renaissance fairground.  How apt, given that this blog is part of the HR blog carnival that is being orchestrated by Sukh Pabial ( http://pabial.wordpress.com/2012/10/21/calling-all-bloggers/ )  - By way of an explanation, a number of UK HR bloggers (a loose term for people who write around the subject of people and work) have each written a piece and between us we offer a selection, with the hope that there is something to appeal to everyone.  So, “roll up, roll up, come and sample my wares...”

In the Somerset orchard where I stood on Saturday, there were over 40 apple varieties and a lumbering pig, chomping the fallen fruit, forged a determined course through the trees, neither looking to left nor right.  In many ways, we need to adopt a similar approach if we wish to see potential (be it aspirations, latent capability, plans or goals) come to fruition.
I mentioned that Apple Day reminded me of the old-style fairs of the Renaissance period.  The day had an almost sixteenth century air to it, with colourful characters, swigging from flagons of cider whilst enjoying the spectacle and livestock wandering free.  At times I felt like a character painted into the side of a magnificent painting – observing, but at the same time being an integral part of the overall scene.   An artist frequently credited with being the greatest and most influential of the Renaissance age was Michelangelo (or Michelangelo di Lodovico Buonarroti Simoni, to give him his full name).  So great was his reputation during his lifetime (he was often called Il Divino - “the divine one”) that he became the first Western artist to have a biography published whilst still alive (indeed he had two).  There are some delightful examples of Michelangelo including himself in a painting, as a character on the periphery.  However, one that makes me smile (despite the subject matter being gruesome) is on the ceiling of the Sistine Chapel, where he has depicted himself as a head in profile, being carried on a platter by Old Testament heroine Judith, after she had decapitated the  Assyrian general Holofernes.
There is much that we can learn from Michelangelo when considering “potential coming to fruition”.  You might be interested to know that, despite adorning the Sistine Chapel and producing some of the most famous paintings in the world, he believed that architecture and sculpture were higher forms of art than mere painting. He was ambitious and encouraged others to be so:
”The greater danger for most of us lies in not setting our aim too high and falling short; but in setting our aim too low and achieving the mark” Michelangelo

Those of us who wish to produce results should follow his example.  When planning to achieve goals, a person needs to appreciate the ultimate objective they are aiming to attain and the manner in which they will do so. Michelangelo was adept at envisaging the end result:


“I saw the angel in the marble and carved until I set him free.”          -        Michelangelo
Do you know what you want to achieve?
Michelangelo knew how to plan to produce an impactful work of art; anyone with an ambition must determine the actions required to reach the desired outcome:
“A man paints with his brains and not with his hands.” - Michelangelo
“If people knew how hard I worked to get my mastery, it wouldn’t seem so wonderful at all.” – Michelangelo
His work is wonderful – look at the carving in the below detail from The Pieta – it is easy to forget that the flesh and fabric have been hand carved from unforgiving marble.  What is also amazing is that he produced it when he was only twenty four.  Michelangelo was not afraid of arduous work, trial, learning from failure and practice; nothing can substitute for hard graft when trying to achieve a goal.

The concept of grafting seems to bring me back to the orchards...  In renaissance times a popular fruit grown in orchards was the quince.  The first record of quince trees in the UK was in 1275, when Edward I planted four at the Tower of London, although the fruit are mentioned as ingredients in recipes from the 13th century onwards.  In the medieval and renaissance periods, raw fruit was thought to be bad for people, so it was customary for fruit to be cooked.  Today we opt more for raw fruit and hence apples and pears have become the orchard fruit of choice.  Nowadays quinces are seldom seen for sale in Britain and America, except in specialist markets, but they remain common in parts of the Mediterranean and Middle East.  The quince is a rare fruit with a key place in folklore and tradition.  It was probably the original “apple” of Adam and Eve fame, as the plant originates from the Caucasus region, where the Garden of Eden was supposedly located – the word was mistranslated from quince to apple due to an etymological similarity of words.  Greek mythology claims that the quince was a gift from Aphrodite, the goddess of love, and it was customary to toss quinces into bridal chariots.  This custom continued into Roman times with quinces being a symbolic gift from a suitor, signifying true love and commitment (much like red roses are in our modern world – it is interesting to note that quinces and roses are closely related) and even today in rural areas it is customary for a bride to eat a quince before retiring to the nuptial bed.

Compared to most other fruits, the quince is relatively high in pectin (a natural gelling agent that enables jams and jellies to thicken and set) hence it has traditionally been used as an ingredient in preserves – the Portugese word for quince (marmelo) evolved over time into “marmalade”.  When I was in Crete earlier this summer, I enjoyed exquisite quince compotes with natural Greek yoghurt and, in many parts of Europe, it is traditionally served as a firm paste, called membrillo (Spanish), cotognata (Italian), or, as alluded to above, marmelada (Portugese), which is delicious with cheese.

The quince can be used as an evocative metaphor demonstrating how potential can come to fruition.  In the main quinces are disgusting when eaten raw – despite exuding an appealing, almost tropical, guava like smell (that hints at its potential).  The skin is tough and waxy, although easily bruised, and often, before it ripens, it is covered in a slight downy bloom like the soft fluff of an adolescent’s beard – not really something you’d want to eat.  The flesh is unpleasantly astringent and surprisingly hard – sufficiently so to make you spit out a bitter mouthful after attempting a bite.  It is only if you know what it can taste like, are prepared to make the required effort to achieve that delectable result and want to undertake the difficult task of peeling the damn thing, that through your efforts you will see its potential actually come to fruition.  Once cooked, which can take hours, the quince miraculously transforms into a succulent delicacy – with a blushing, pale-rosy hue and a delicately perfumed taste 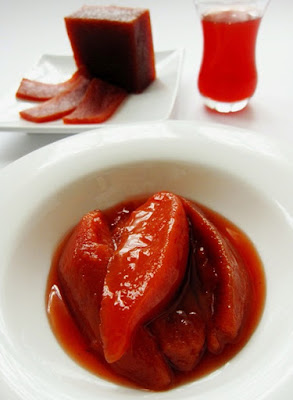 The quince has a short season (October to December) so, if you are tempted to sample them, I urge you to grasp the opportunity.  Let me know if you do and whether, in your opinion, their potential reached fruition... if not just bear them in mind as inspiration on your journey to help yourself and others to see the fruition of potential and plans. 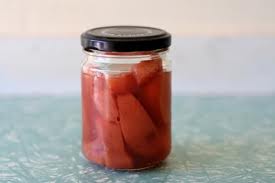