We all have them, indeed we wouldn’t be here without them; today is Mothering Sunday in the UK, so here are a few thoughts on mothers and their role in families and societies over the years.  Mothers and their fertility have been valued since time immemorial.  The earliest known sculpture is a six centimetres high, 35,000 year-old figure of a woman carved out of mammoth tusk, found in the Hohle Fells cave in south-west Germany.  She may not comply with modern concepts of beauty (indeed she’d never make it down a cat walk) but, despite her size, she has presence and personality and is clearly a treasured and fertile female. 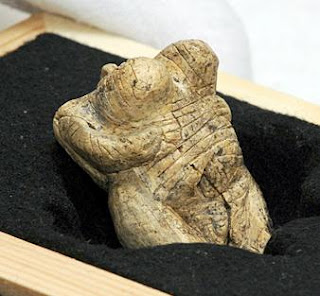 A bit like the Hohle Fells “Venus”, my mother is a diminutive, but fine figure of a woman and has survived some rough experiences.  I love her: she’s great company, highly intelligent (much more so than she credits herself as being), knowledgeable, a little eccentric (who else would store a bat in her freezer, beside the peas, until such time as she could show it to children at the local primary school) and I am so proud of her (she has recently been given the all-clear after a worrying battle with cancer).  I will always be indebted to her for the moral compass that she embedded in me as a child, as well as for the way that she has introduced me to many of the best things in life:
I wish I had been more aware and supportive when younger.  I remember an awful day in Hong Kong when the family knew we were returning to England.  My mother was responsible for the move and contacted various removal firms for quotes; one (a well-known name) was significantly cheaper but promised to provide as good a service as its competitors.  My mother arranged for them to pack-up and ship the contents of our family home.  The workers duly arrived, took everything off shelves and out of cupboards, dismantled furniture and, once the house was at maximum chaos stage, announced that they were leaving.  My mother was horrified, especially when one of the men told my mother that they had been specifically instructed to make things as unpleasant as possible.  She called the boss of the firm and asked what was going on.  He confirmed that he had ordered the workers to make a mess and leave, as revenge for the affair my father was having with his wife.  My mother was deeply distressed – she was unaware of my father’s alleged infidelity.  I remember a Chinese friend felt compelled to feed my mother an infusion of boiled bees to calm her – apparently a traditional treatment for shock.  My mother was exemplary, she did not share her distress with her children, but she still knew that she had to get us and our things back to the UK.  She bravely telephoned again and appealed to the man.  On the basis of her clearly being an innocent victim, perhaps even more hurt than he himself, he ordered the workers to return and finish the job.  I have always admired my mother’s bravery and the way in which she focused on what needed to be done to support her children. 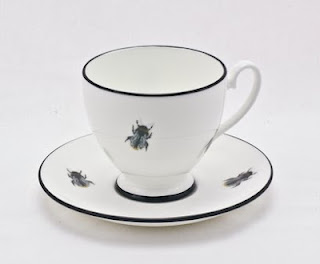 Numerous myths and legends abound depicting maternal devotion: One of the earliest is Rhea (mother to the Ancient Greek gods) who swapped her recently born son, Zeus, with a swaddled rock to prevent his father from eating him, despite knowing that to do so would probably cause her husband’s demise.  The ancient Egyptians revered certain animals because of their notable nurturing of their offspring (for example the cow, the vulture and the lioness) and hence the Egyptian mother goddesses, such as Hathor, Nekhbet and Bast, appear with the heads of these creatures in many stories in which they succour and care for the weak.   Demeter, the Greek mother goddess, responsible for the harvest, mourns her abducted daughter, Persephone, neglecting her godly duties in her distress, and thereby causing the barren season of the year. The Inca goddess Pachamama was renamed and supplanted by the Christian Virgin Mary by the Spanish conquistadors, due to their similarities in maternal devotion (although Pachamama, like the Virgin Mary, is still worshiped today).  In many global beliefs an earth mother is seen as the personification of Mother Nature who looks after mankind, one of her many children.  She is a treasured allegory for people around the globe who wanted to feel cared for and protected. 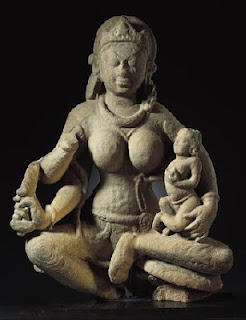 It’s no wonder that the pelican was used as a symbol of devotion in Art from the Middle Ages onwards.  It was widely believed that it demonstrated extraordinary maternal commitment and a keen sense of duty.  According to legend, “the pelican in its piety” plucked at its own breast to cause blood to run and sustain its children.  It is probable that this concept derives from the manner in which it feeds its young from the pouch in its bill, which could result in it getting a messy front or appearing to be bleeding (due to the internal colouring of the pouch against its white chest).  Clearly many medieval artists hadn’t seen an actual pelican as it is often depicted it as having a fierce hawk’s beak to tear at itself. 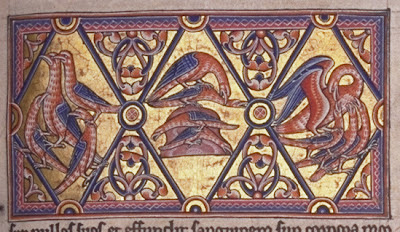 Clearly, not all mothers are wonderful, some mothers are immune to the charms of their off spring and/or are neglectful or at worst abusive - Joan Crawford and Katherine Mansfield spring to mind.  However, as a mother, I am often in awe at the strength of maternal instinct and devotion.  Women’s tendency to self-sacrifice for the benefit of their young, even for non-blood related children, is commonplace.  These traits are also typical in the animal kingdom.  I recently read of a tigress in Thailand who became so despondent at the death of its cubs that zoo keepers feared it would pine until it wasted away.  In desperation they decided to replace the cubs with surrogate offspring.  Some piglets were sourced and wrapped in tiger cub pelts to reduce the risk of rejection (or worse). She made a great recovery.  The below picture speaks for itself: 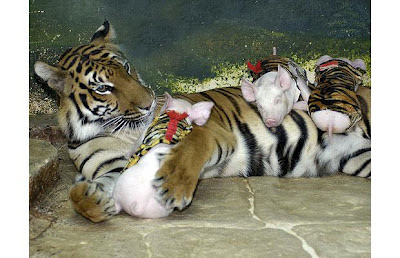 There is no doubt that motherhood is a driving force and one of the aspects of life that have been celebrated since long before history began.  It is clear from the headlines in newspapers and the plots of soap operas that the role of mothers remains a topic of public interest and concern.  I love being a mother – the G-L boys have given me such joy and through them I have seen and experienced the world in a new way.
I know that I am blessed.  As well as being a mother with amazing sons, I have a wonderful, loving mother whose example is one I can only aspire to.  She has given me and my sisters so much.  Her grace and dignity, even in times of stress (as demonstrated by her serene and stoic resolve as I escorted her to have her wedding ring cut from her finger), are traits I hope, should the need ever arise, I can match.  She has encouraged and supported me and my siblings to become fulfilled, independent adults with the strength to stand by our values.  Thanks to her I have the drive to continue to learn and grow, building on the foundations that she has put in place.  I can empathise with Strickland Gillilan's words in his poem:

“You may have tangible wealth untold;
Caskets of jewels and coffers of gold.
Richer than I you can never be –
I had a mother who read to me.”
Posted by KateGL at 17:28