For as long as I can remember I have been fascinated by dragons.  When I was a child my mother painted a wonderful green, scaly dragon with golden spurs, made of metallic paper, for my party, so that we children could pin-the-tail-on-the-dragon, instead of the conventional donkey.   My father and a close family friend, who was an eminent judge, would often pretend to be dragons and chase us, a squealing brood of excitable kids, round the garden while threatening to catch and eat us.  The terror and exhilaration was intoxicating.  My father also told wonderful stories in which dragons were often central characters – at times frightening and often wise.  Dragons seem to appear in almost all nations’ myths and legends – perhaps a residual memory of the times when dinosaurs once roamed the earth and pterosaurs swooped in the skies, or from peoples’ imaginations and deductions on discovering fossilised bones and remains.
One of my favourite works of art is by Paolo Uccello and hangs in the National Gallery in London. 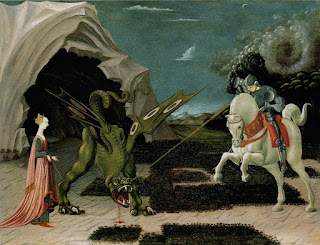 It is believed to have been painted around 1470 and depicts St George on a muscular white horse, armed with a lance, riding to rescue a two dimensional and not very pretty princess (she has the flattest feet I’ve ever seen) from a tyrannosaur-legged but apparently armless, plague-bearing dragon that lived in a cave (that seems to be constructed out of meringue).  It is an interesting painting on many levels and is full of symbolism: St George’s lance perfectly aligns with the eye of the storm above him, thereby indicating that he has been given celestial aid, the white of his mount symbolizes the saint’s purity, the symbolic trinity is evident even in the triangular shape of the dragon with its three-clawed feet.  There is an entertaining poem written by U.A.Fanthorpe inspired by the painting, the final verse of which makes me think about the impact of training and development on performance and those around us.
http://english.emory.edu/classes/paintings&poems/uccello.html
About twelve years earlier Uccello painted another version of the subject.  There are striking similarities: Saint George appears to be riding the same charger and Uccello uses the geometric fields and vegetation to serve the same purpose of enabling perspective and depth.  However, it is clear that the artist’s work has evolved.  I find it interesting to compare the two paintings and see how the style and approach to the subject has developed over the years. 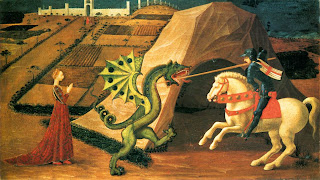 Development is a natural part of human progression and one of the areas where great leaders, managers and HR professionals can add the most value.  Enabling people to appreciate their strengths and shortcomings and then helping them to build on their abilities or overcome weaknesses, is both rewarding and crucial if an individual or a business wants to grow.  The office beast can be helped to become the soaring dragon of success, taking the business to greater heights.
As well as the development of people and organisations, I take pleasure in etymology, i.e. understanding the origin and derivation of words.  The Latin word “draco” means “dragon”, however, the word “draconian” probably derives from Draco a Greek legislator who is credited with creating the first written legal code enforceable by a court of law.  Some of his laws were very harsh, hence “draconian”, (death was a penalty for even minor offences, according to Plutarch, when challenged, Draco explained that he felt death to be appropriate for the minor offences and regretted that there was no more severe penalty available to punish and discourage crimes such as murder).
As many of you know, the commencement of the lunar cycle, starting on Monday (23rd January), heralds the beginning of the Chinese New Year.  It will be the Year of the Dragon.  The dragon is the only mythical creature amongst the twelve animals of the Chinese zodiac.  For the Chinese, dragons are not the terrifying beasts of western tradition but noble and self-assured creatures who are often bringers of good fortune.  In Chinese legend the dragon has the power to foster change and there is widespread belief in its power.  The Chinese artist Ai Weiwei stated last year that he did not expect any major political change in China during 2011, because it was a Rabbit Year.  “The Year of the Dragon is always a big year” he said.  We shall see...  Certainly Eastern astrologers and soothsayers are optimistic for the coming year, because there is no fire in the charts and only a small amount of metal, which is supposed to indicate that this will not be a fiery dragon year and should be smoothly propitious.  Regardless of your confidence in such predictions, it is worth noting that belief can influence the markets that impact us all.  For example, the acquisition of gold is often linked to lunar cycles. 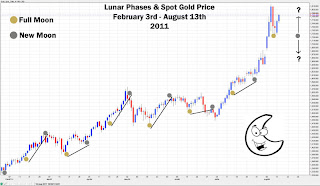 It is probable that the Chinese property market will be more buoyant in the coming year:  traditionally, Dragon Years are popular years for marriage; to get married you have to buy a house.  It is highly likely that couples will have waited for The Dragon before tying the knot.
The Dragon has long been symbolic in the East.  Traditionally the Chinese believed themselves to be the descendants of the dragon.  Certainly the dragon was the totem of ancient people living around the Yellow River and consequently became the emblem for China.  The first emperor, Huangdi, was supposed to have transformed into a dragon and ascended into heaven as an immortal.  Later the dragon was monopolised by the emperors, who claimed to be the sole true sons of the dragon.  The emperor had the image embroidered onto his robes as a symbol of his power and only he was allowed to wear the imperial five-toed depiction.  Dragons are frequent symbols of supremacy and mastery.  When I lived in Hong Kong I was taught that, according to tradition, carp have the ability to transform themselves into dragons by leaping over the Dragon Gate.  The carp is a tough fish that can resist the strong currents in China’s ancient Yellow River.  The fish clearly demonstrates the attributes of perseverance and determination with the fortitude to leap hurdles and achieve ambitions.  Carp becoming dragons are excellent symbols for man’s own desire to advance and a great reminder to us all to keep trying to improve and to focus on achieving our goals.  I wish you all a great Year of the Dragon.
Kung Hei Fat Choi!   新年快樂 Happy New Year!
PS There are many ways of observing the Year of the Dragon (Benedict Cumberbatch will be becoming one as the voice of Smaug in The Hobbit); here is a particularly surprising approach from South Korea, where divers have dressed as dragons to celebrate the times ahead
http://www.youtube.com/watch?v=6SN7T3xJI8Y